A small project for a research group at the University of California (UCLA) to design a cover illustration on the topic of robots that learn physics, utilizing the power of artificial intelligence.

Very aptly put into a metaphor that is widely accessible due to the famous tale of Sir Isaac Newton having a Heureka moment under an apple tree, I designed a robot to put in the place of the esteemed father of modern physics and set up a little scene around him.

Design-wise the guiding principle for me was to keep the robot in a believable kind of Boston Dynamics look, without him drawing too much attention due to extremely high tech detail.

I would have liked to explore the topic a bit further, but unfortunately, the timeframe was too short on this otherwise fun little project. 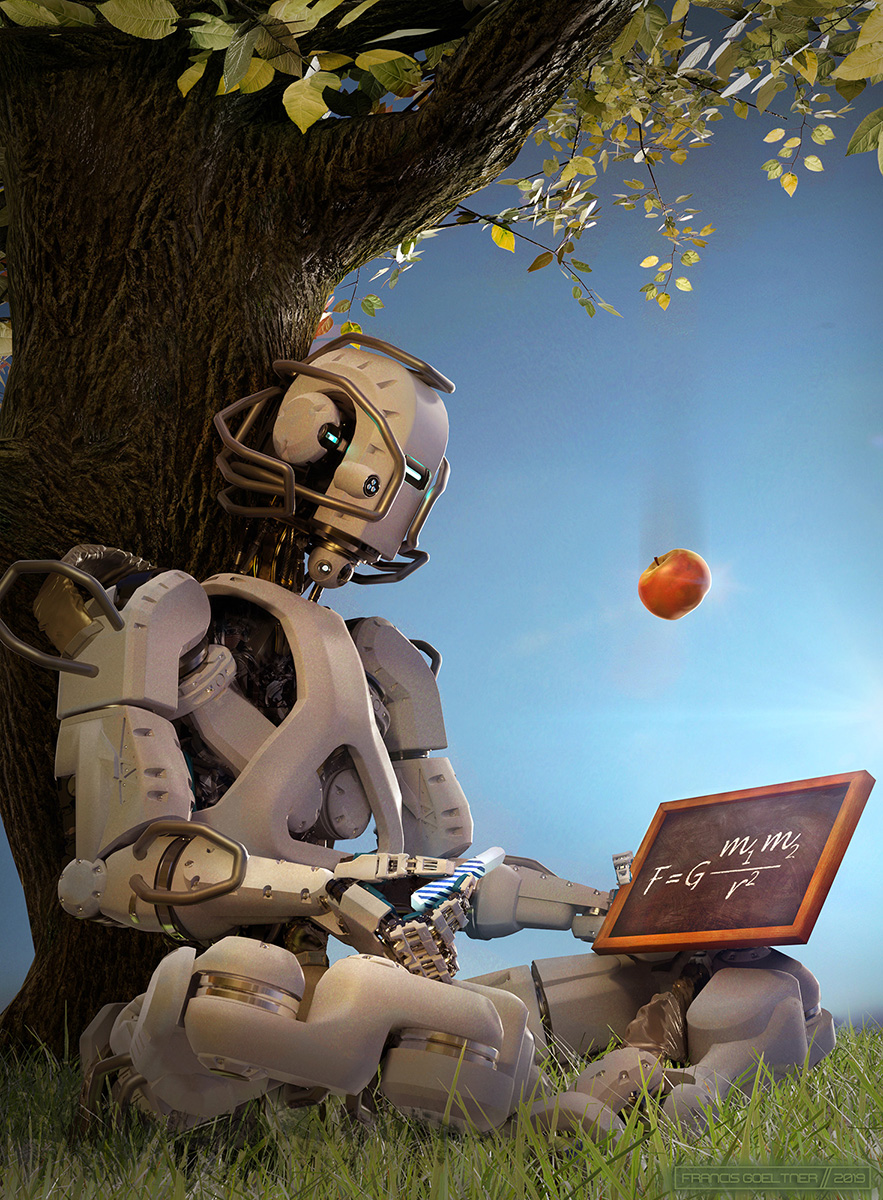 A little idea in the back of my head for some time: In a near future society with widespread transplantation technology (one might call that cyberpunk :D) clinical studies have shown, that vat grown organs and other replacement parts achieve a higher acceptance rate with the target body, if they are not out-of-the-tank blank slates, but have been “used” before. This seems to go deeper than i.e. just contraction stimulation for muscles etc. Organs that have been subjected to the correct gravity conditions, the rhythm of human locomotion or the exposure to sunlight, sound and other stimuli are adopted better in the target body.

Therefore multiple big cloning corporations developed robotic chassis that could walk their transplants around in controlled environments to make them a superior product.

Here is how such a robot could look like, in a bare chassis version, with a possible load-out of transplants, in several color variations. 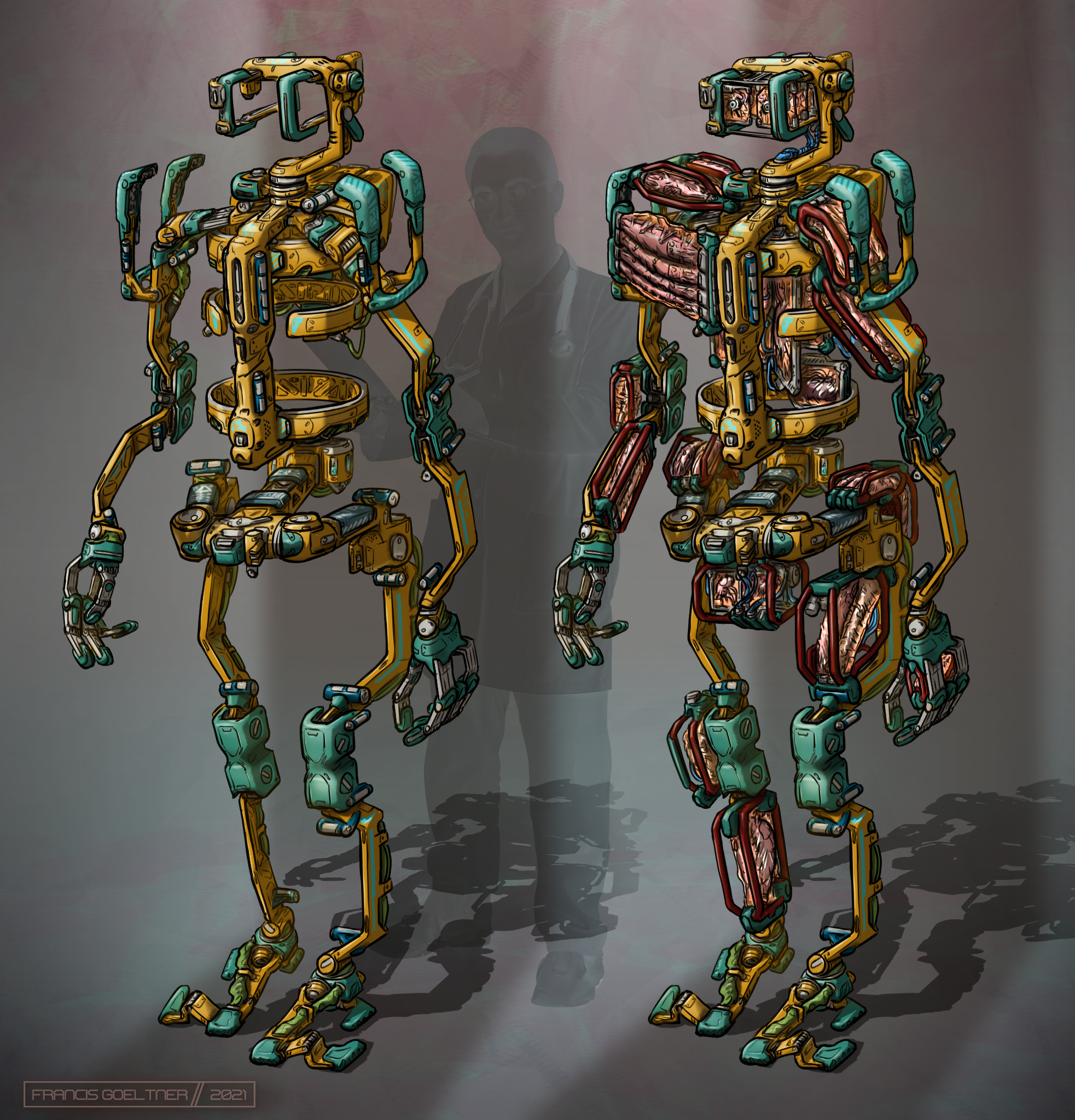 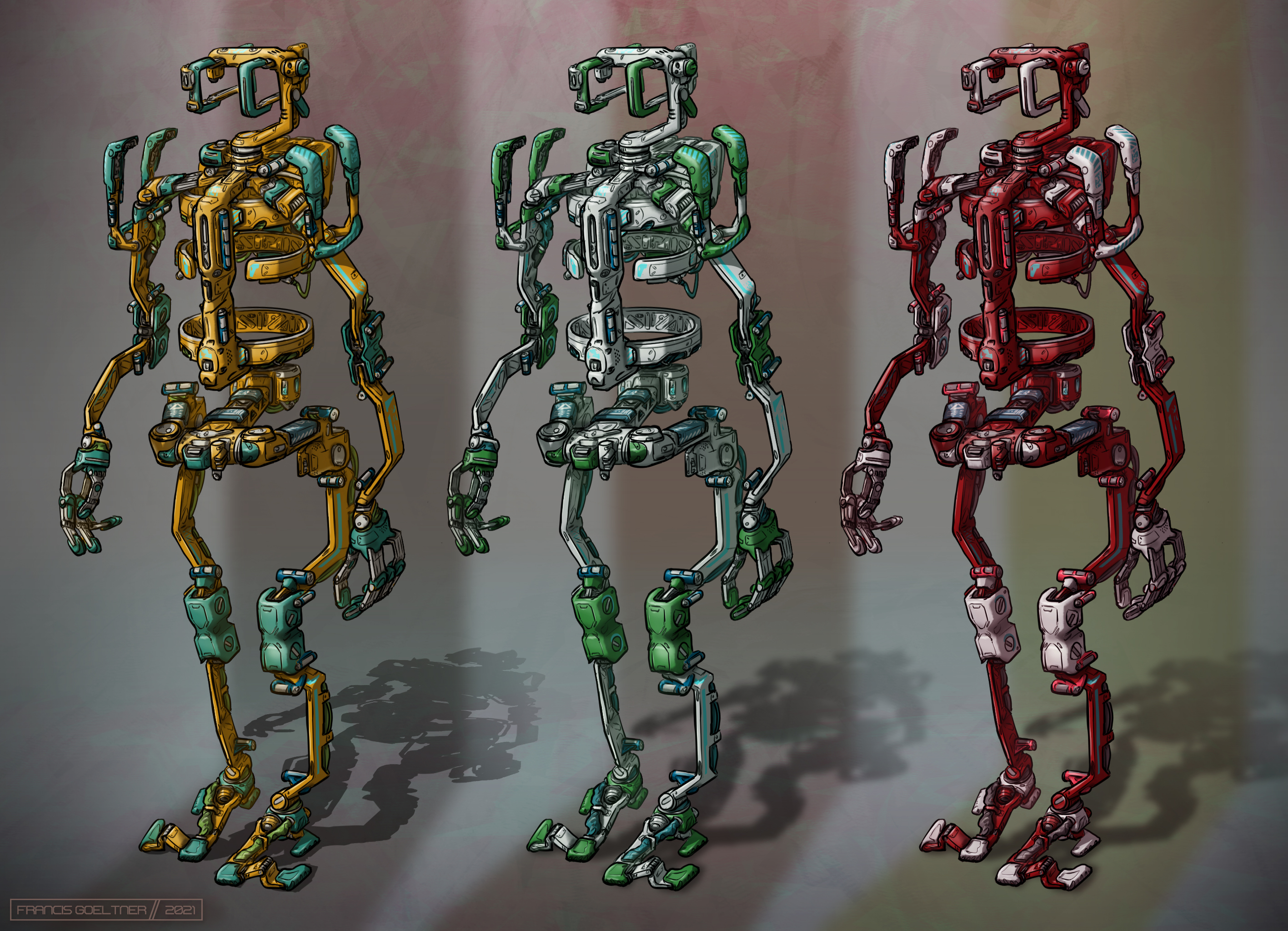 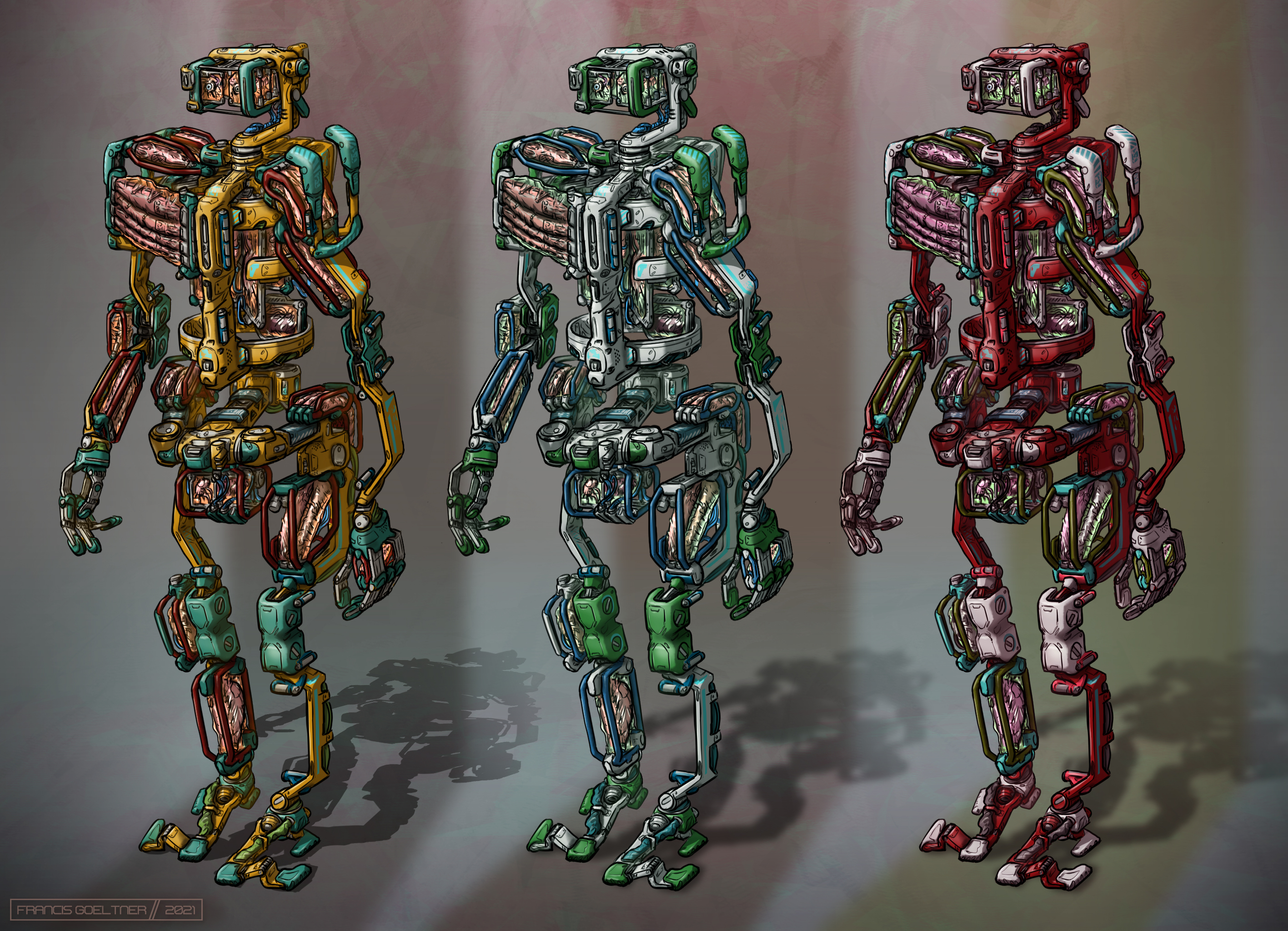 This is a piece that I did for an in-class demonstration at FZD School of Design on the topic of integration of photos into your concept art workflow.

It was a slightly strange moment of nostalgia for me because I was lucky to receive a similar demonstration done by the great Eduardo Penã, during my own term 3 in FZD back in the day.

Unfortunately for contemporary students, I am nowhere near as good as Eduardo, but the technique he showed us from his digital matte painting repertoire has been a great asset for me in the time since, so I wanted to share my knowledge and demonstrate the process on this image.

So the content premise for the piece was not too complicated: I wanted to take a historic, architecture based environment and put a bit of a spin on it to make it interesting. I got inspired by images of Mayan and Aztec archaeological sites and also by my reading in the last couple of months about catastrophic climate changes in prehistoric times caused by meteorite impact. Amidst all that speculation about how our society would handle such an event, I wondered how ancient civilizations like the Mayans would have tried to deal with that and that is basically what this piece shows.

I imagined a mid-size Mayan city on the coast after a dramatic temperature drop and a couple of days of snowfall, desperately huddling together and turning to their gods, trying to placate their obvious anger with some burnt offerings.

A little something different today, not only the usual 90 minutes fumbling around with brushes ;). I have been reading up on the impact of AI on jobs in the future and also had a re-run of The Wire lately as background chatter while working. That crossed over at some point and I played a little head experiment, what a show like The Wire could look like at around 2030 or 2040. Sure AI and robotics will have made a big jump by then, but would a run-down police force like the portrayed Baltimore PD be even able to afford that? Expensive patrol robots vandalized on a regular basis? Cameras on every corner and high-end crime prediction AIs racking up server time in the millions? Probably not. I would guess that they would probably have a centralized core system for coordination and data processing but beyond that it would still be meat bags, doing the groundwork.

That’s how I came to this equipment design study (done in roughly 4 hours), that focuses heavily on the possible, rather than on the crazy high tech. AR glasses with bone conduction and mic providing continuous connection to the coordination AI (and neck strap so these drunks don’t lose them… that often); shoulder holster with integrated radio antenna, Thumbprint locked weapon holster and 2 miniaturized body cameras to fit into a shirt collar; Utility pouch for relatively up to date foldable service phablet together with smartwatch; Wireless charging holsters (powered by the battery unit in the shoulder holster) for 3-4 lightweight forensic drones (LIDAR and stereoscopic multispectral crime scene mapping and evidence recognition). Also, of course, a pattern projector for certain synthetic fabrics, to display identification as police (When the weapon is drawn and the detective is NOT undercover :D). Oh yeah, and they got finally rid of the stupid idea of buttons on shirts by using smart material bonding strips, which comes in handy when the whole outfit is a little disheveled from a hard previous night out drinking as this detective has done. New tech, old vices... 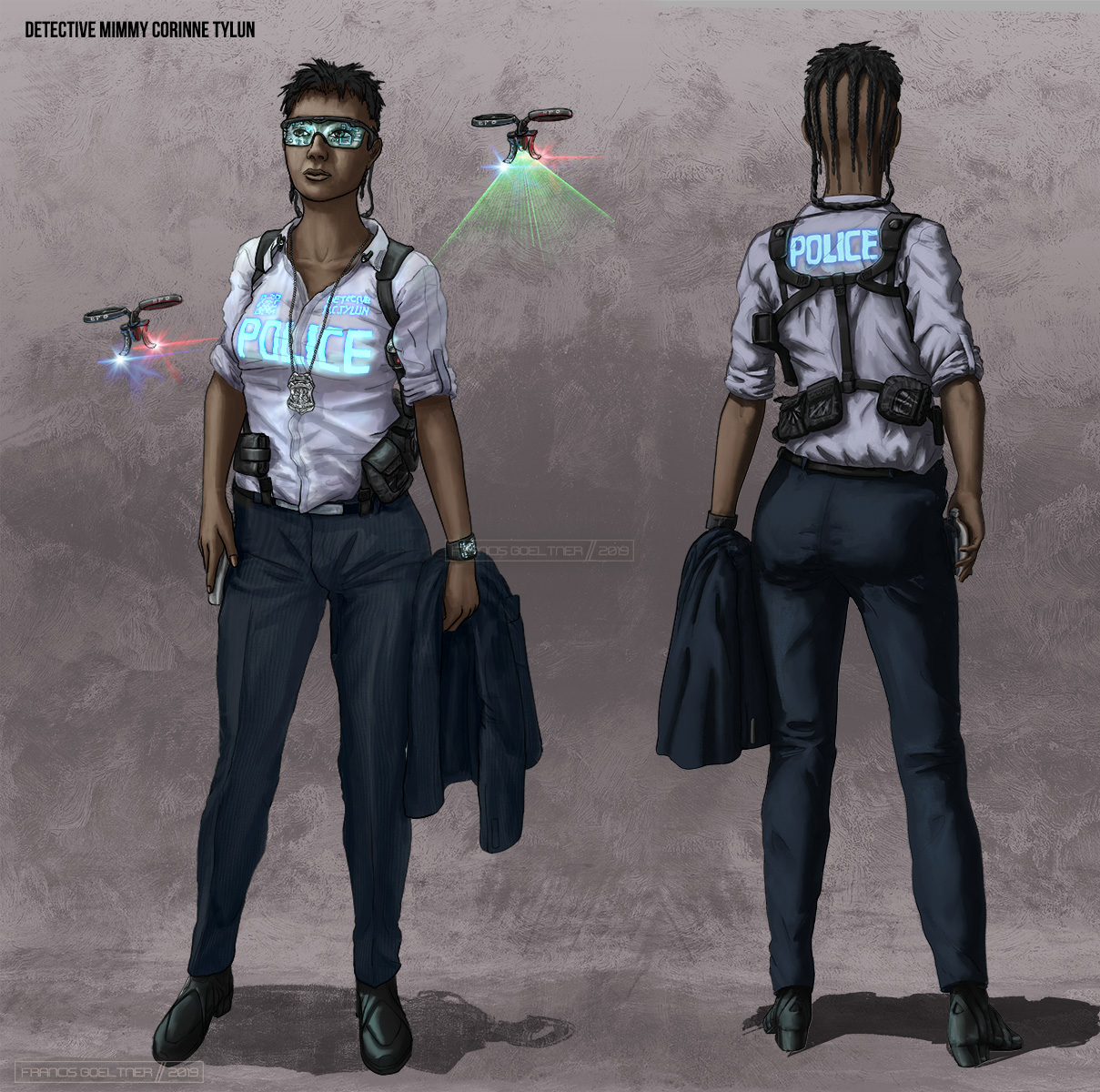 Again something different in this little post: I did a character/equipment design not too long ago for a near-future homicide detective, inspired by recent articles and podcasts about AI’s impact on the workplace in the years to come and a recent rewatch of the all-time great cop series ‘The Wire’.

In the same setting, I felt compelled to do another detective in the homicide department of the Baltimore PD. I am focusing on a centralized core system for coordination and data processing but beyond that it would still be meat bags, doing the groundwork, so no Minority Report kind of tech or Elysium-esque robot policemen in this environment.

Since I did the female Jimmy McNulty version last time around already as African American, this detective comes from another ethnic background that will predictably see a population increase all over the world. I see him as an adaptation of Bunk Moreland from the original show, that’s why he displays a certain pride in his suit style (including the 3D-printed fabric applications), along with considerable weight and sports a strongly flavored cigar type vape device. An AR monocle-visor is less distractive than the full glasses (still complete though with bone conduction headphones and mic) and he also carries the crime scene data hub at his utility harness that provides feed updates from the sky-mimetic blimp drone overhead that relays the gigabytes of traffic back and forth, which the cops need to work. He also carries the standard shoulder holster with integrated radio antenna, thumbprint locked weapon holster and 2 miniaturized body cameras clipped to different sections of his attire; He has taken his foldable service phablet out of the utility pouch to casually display his credentials to a citizen he is questioning; Due to the spacious data hub he is not carrying as many forensic LIDAR drones. He also tries to keep the pattern projector for the ID display in his shirt’s fabric at a minimum, since he hates the visually loud projections, that - according to him - “ruin every m*?@§#$%&*ing outfit”. 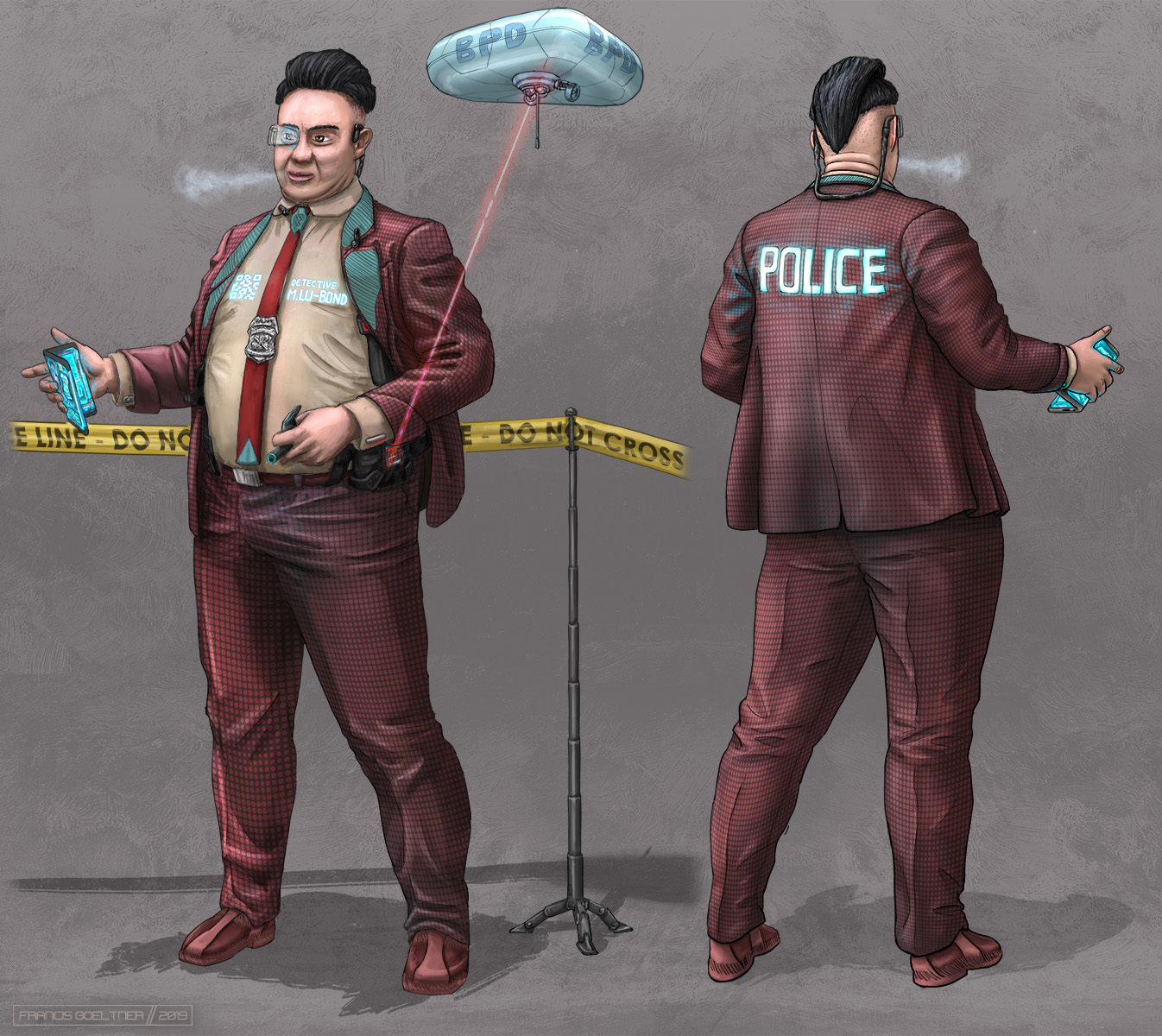 Returning to one of my old projects for an environment piece about light and architecture.

In this alternate history scenario, set around 1900, industrial age Europe is hit by an ice age.

In earlier work, I have explored, how the scenario has evolved in London over 5 years of bitter winter, how people have survived and what factions have formed. This piece is a kind of an origin story moment for the religious fanatics, that would become known as “Gear Grinders” for their hatred of technology.

Depicted is the moment, in which the self-declared new Bishop of London, meets a crowd of people seeking shelter from the force of the icy storms in St.Paul’s Cathedral. The grand building has lost it’s windows to the storms and therefore is also filled with snow, but it would provide a solid place to fortify and grow into a stronghold for the zealots of the Gear Grinders on their violent crusade against technology and the use of steam power. 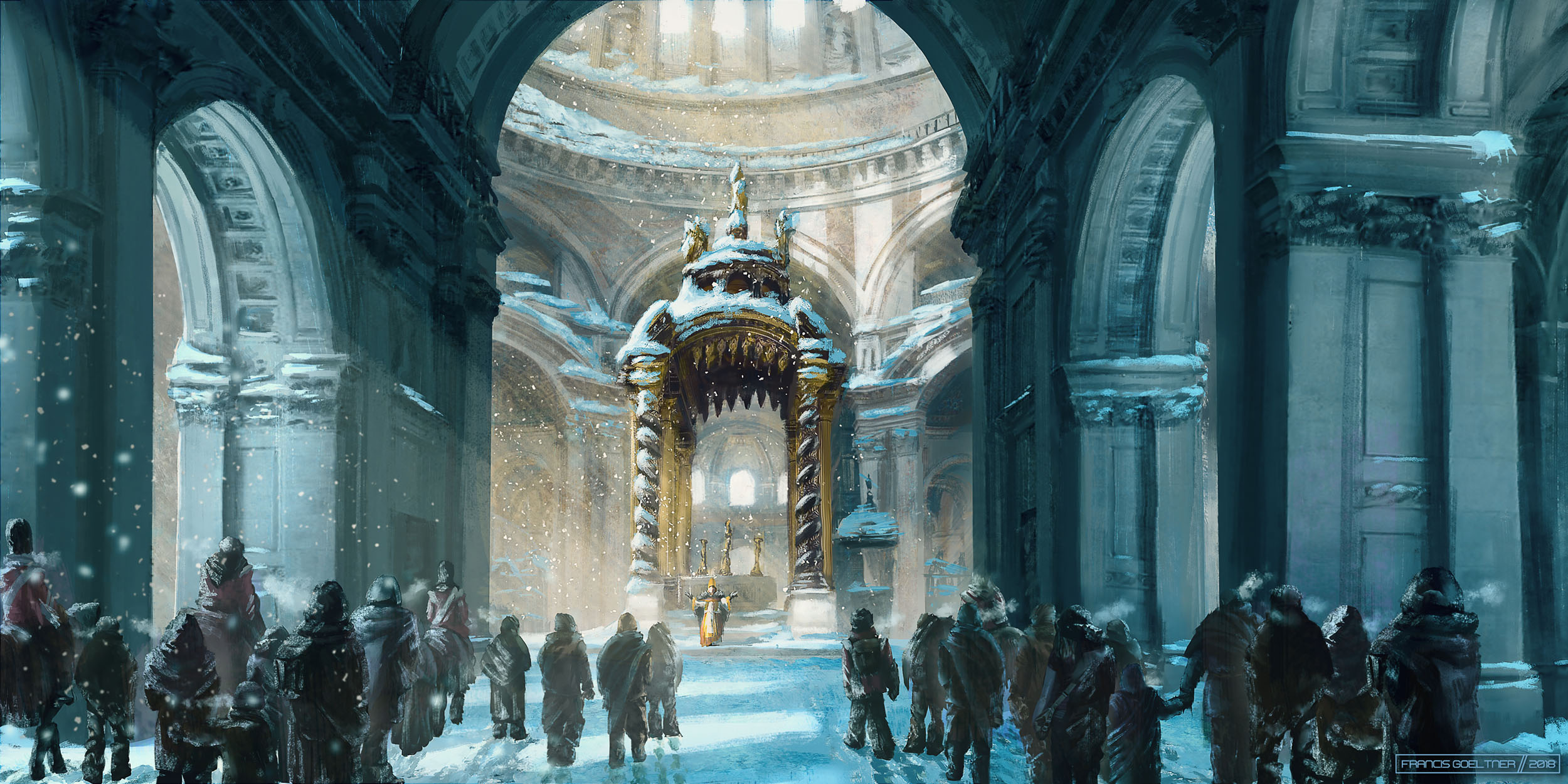 I wanted to visualize some of the magic effects, described in the book, like the depletive extraction of colors as an agent of animation of dead things together with life force in the form of breath. 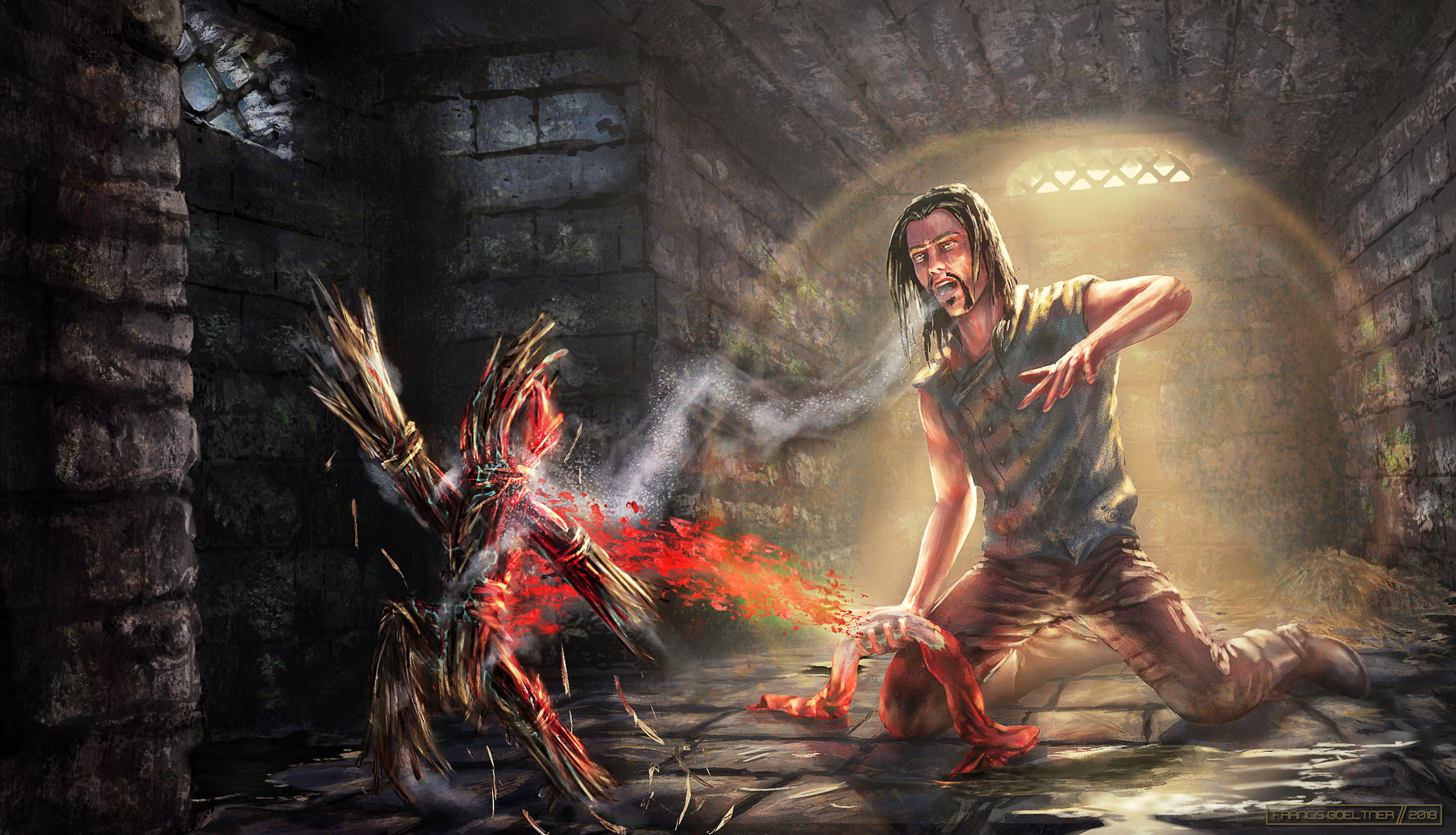 Inspired by the great fantasy novels of the “Mistborn” series by Brandon Sanderson, I wanted to give it a shot and visualize a bit of this fascinating world and chose the first scene of the first book “The Final Empire”.

If you have time, try these awesome books (or almost anything written by Sanderson), for the author brings some fresh wind into a genre, which is overloaded with rather uninspired stories in boilerplate fantasy worlds. Especially his extremely well thought through magic systems and world structure give the fantastic an almost palpable level of immersion, so really great stuff.

Concept for a historical scene set in the middle ages during the time of the plague in northern Italy. A traveling physician arrives at sunrise in a small market town near a nobleman’s castle, which is severely haunted by the terrible disease.

The gif below the artwork details the creative process. 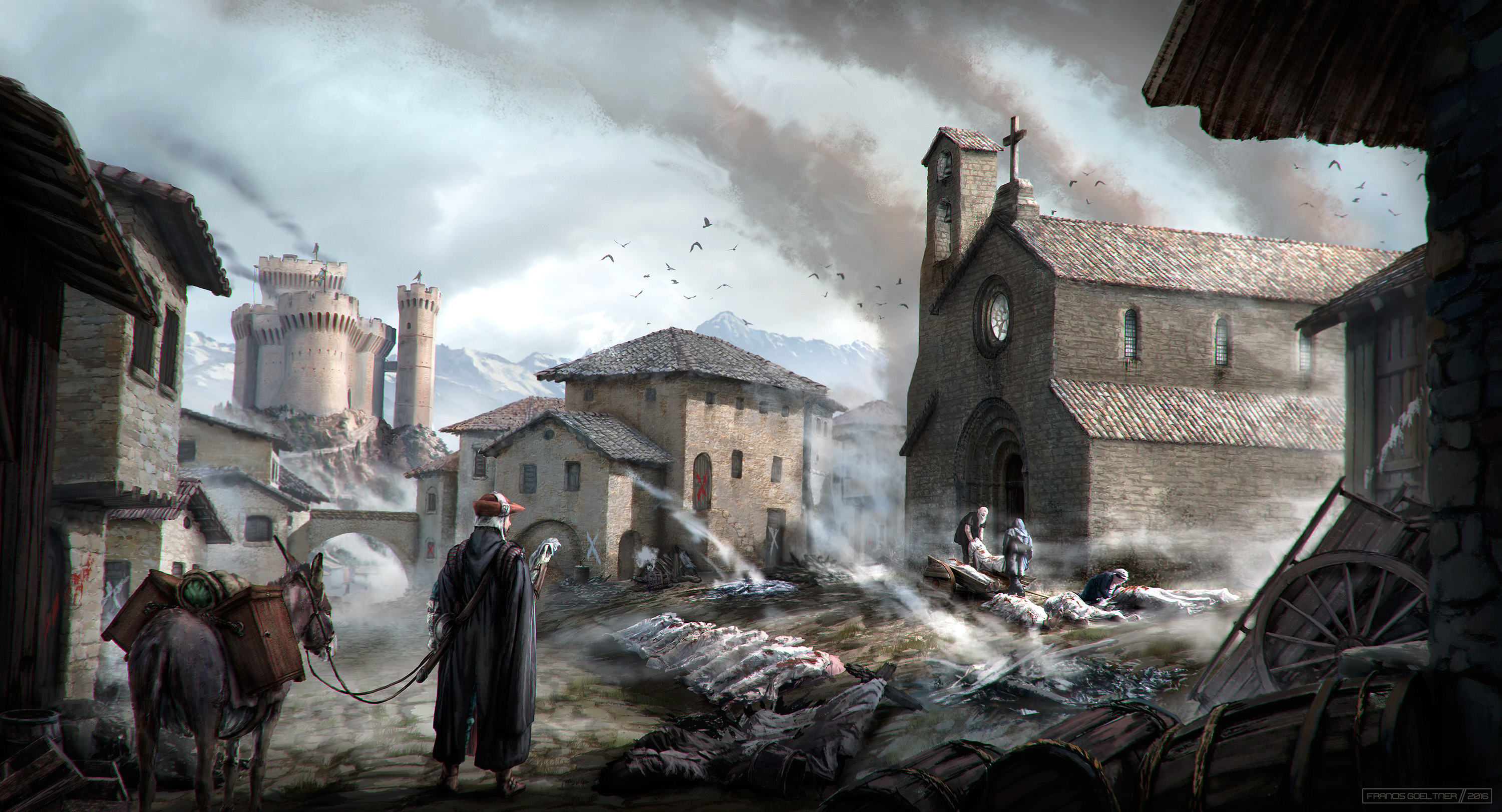 Character concept for the traveling physician, his personal equipment and defensive weapons for dangerous journeys (versed in their use due to time served in the military). 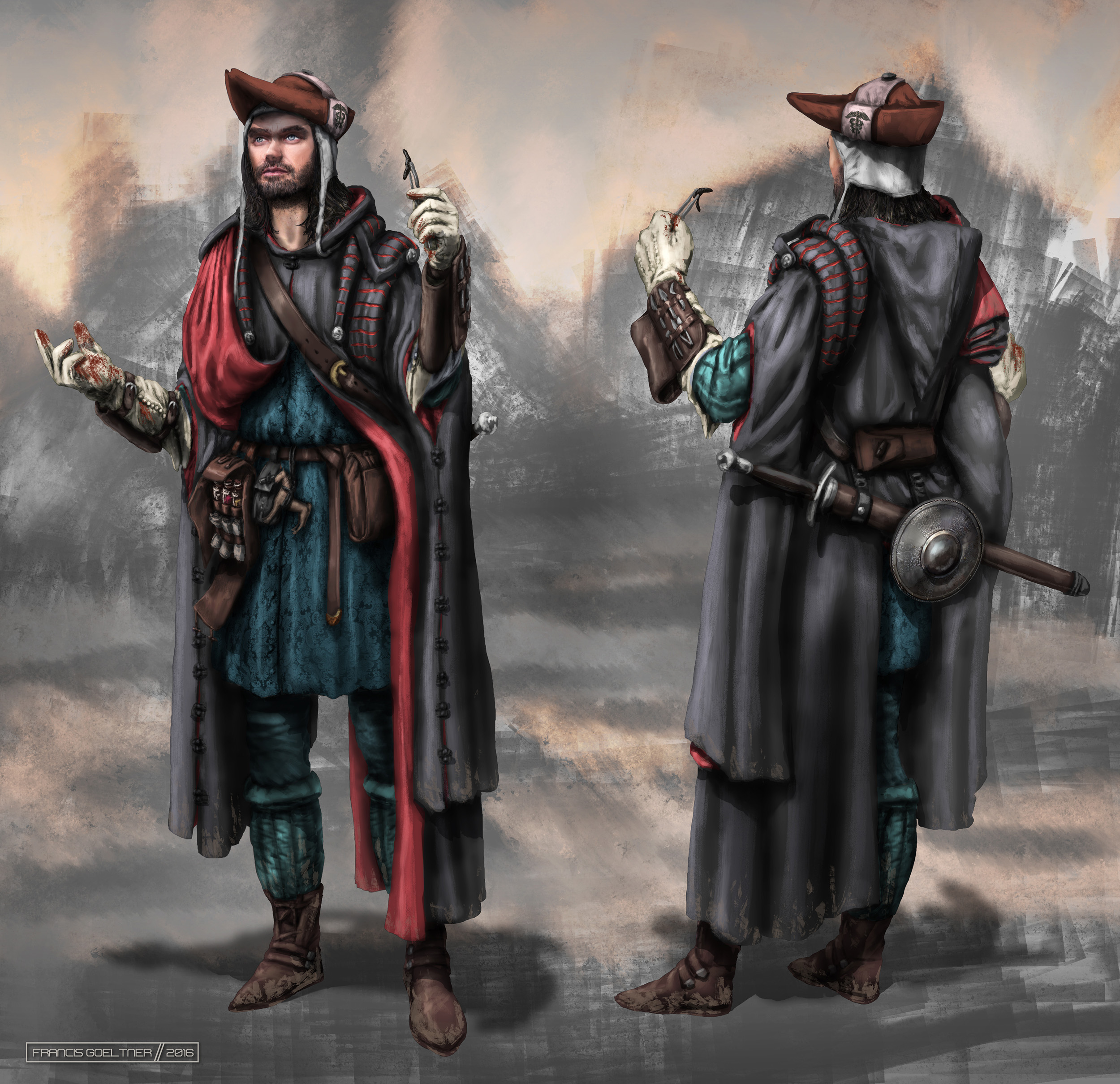 Concept for a reconnaissance mech for an interstellar mercenary unit from multiple angles with unit insignia and tactical decals - first in a schematic view, and below in an action shot. 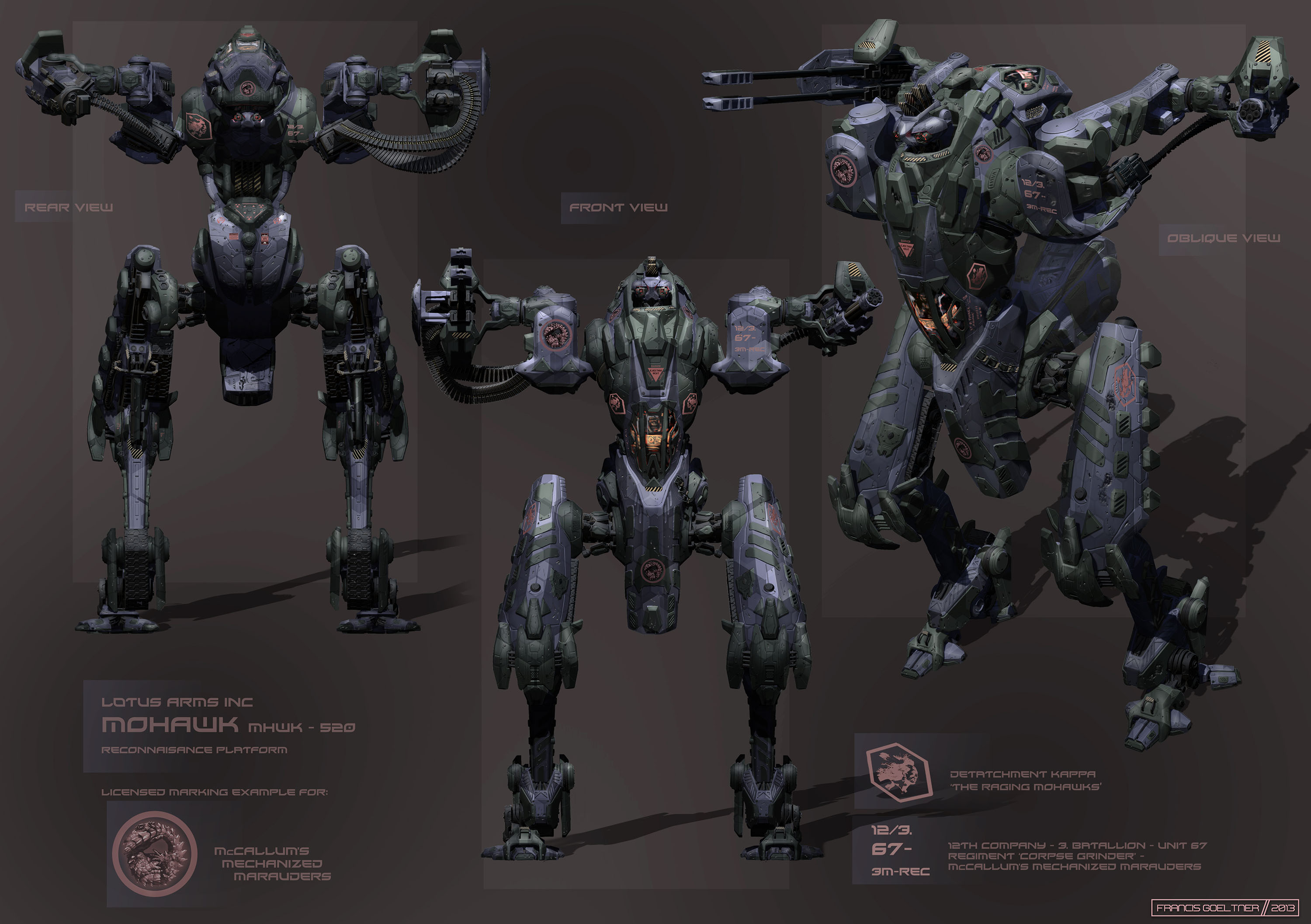 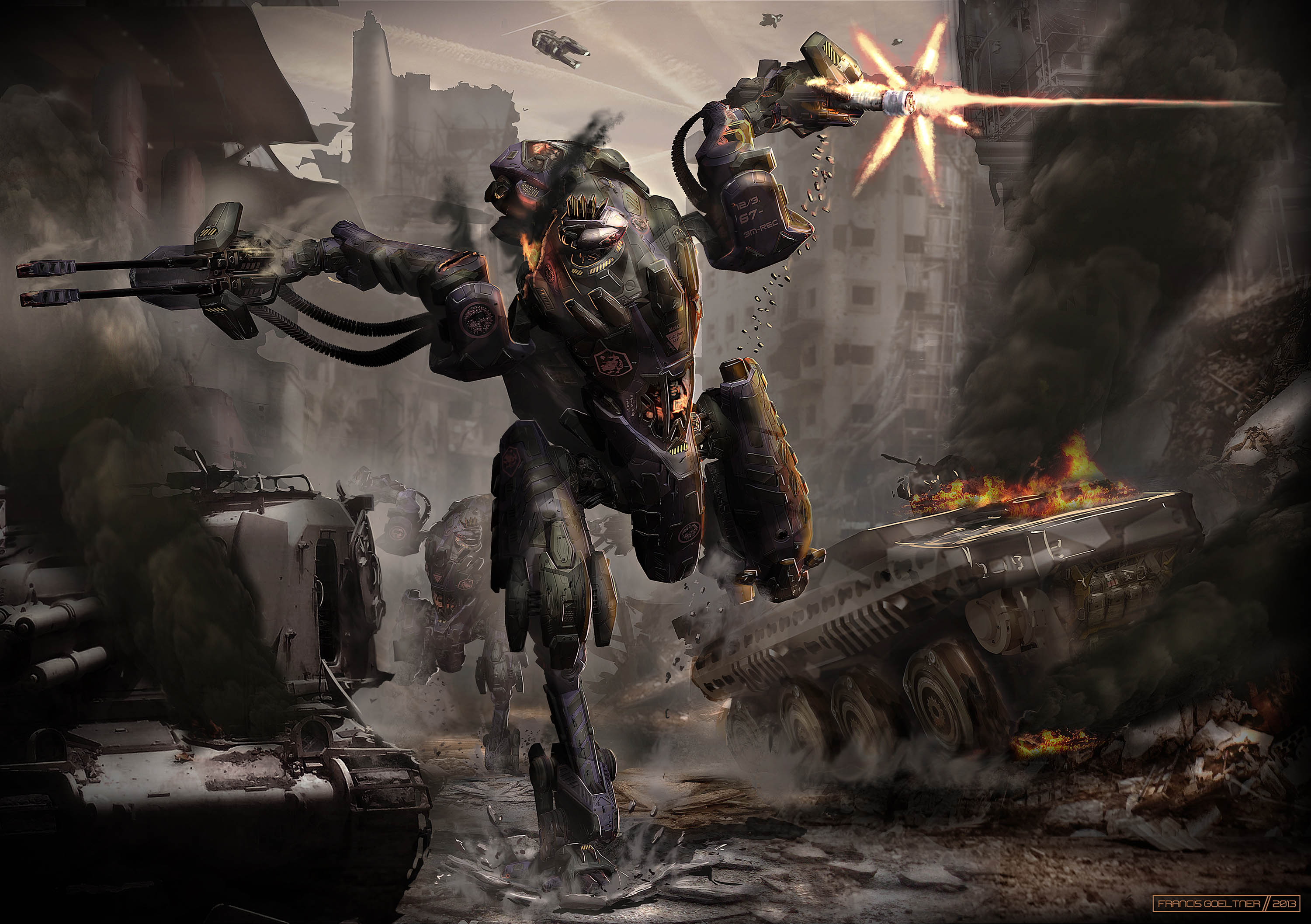 Character concept for a little side project, created around the idea of isolating near future Istanbul due to political controversy with the European Union. A scenario similar to post world war 2 Berlin arises, with huge numbers of refugees crammed into the old city, creating whole quarters of vertically added slums on top of existing buildings.

A character design was needed to make use of the increased verticality of the setting, so I created Çekrige (Turkish for grasshopper), a cybernetically enhanced war-veteran, who works as a very agile courier of sorts by utilizing his specialized legs and a drone.

Below the final concept, a gif gives a little glimpse of the process steps involved. 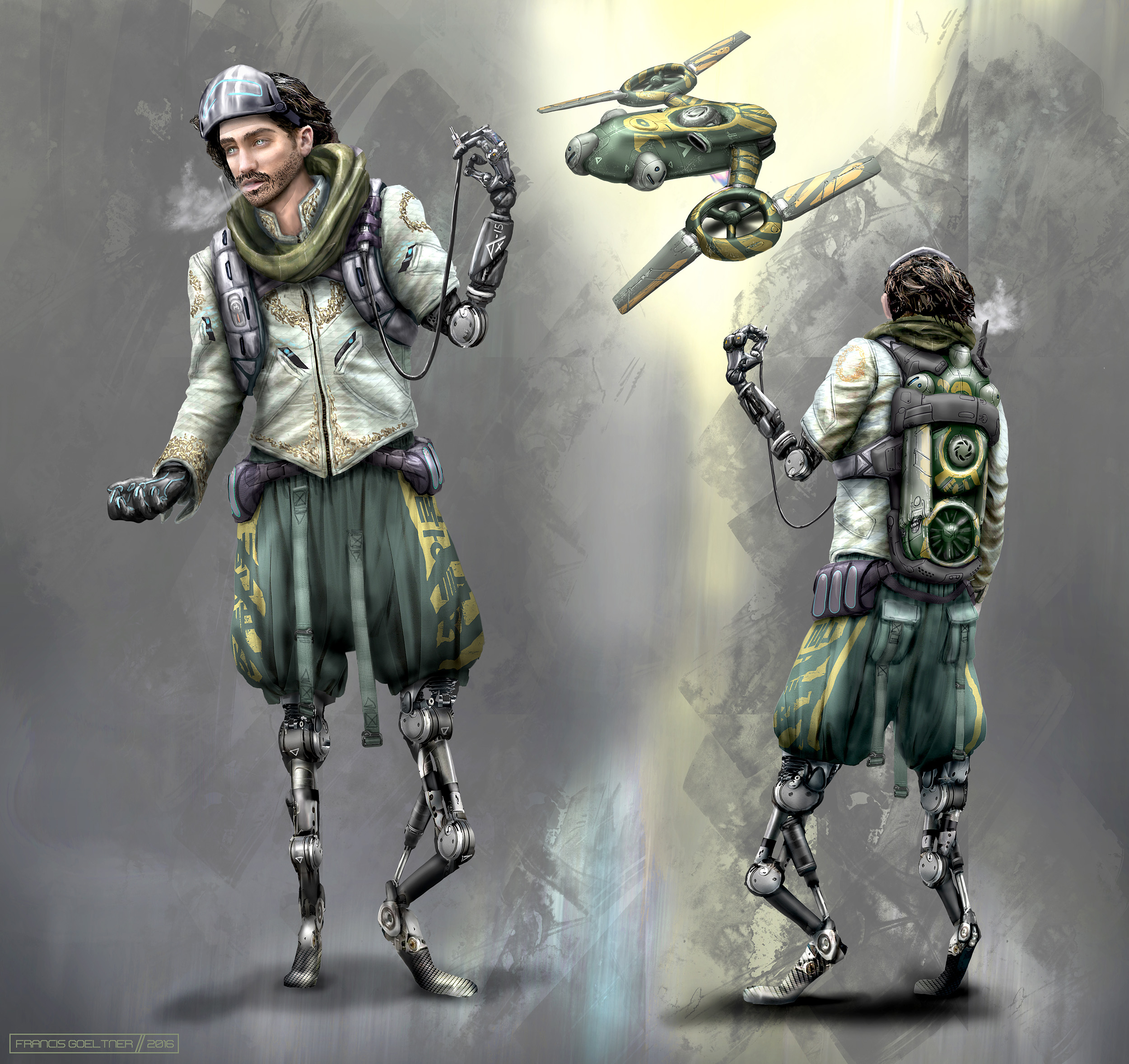 Action shot of the character çekirge in a typical adrenalin loaded chase through the district of Galata, right before catching the cable of his drone and escaping to the chaos of the upper levels slums. 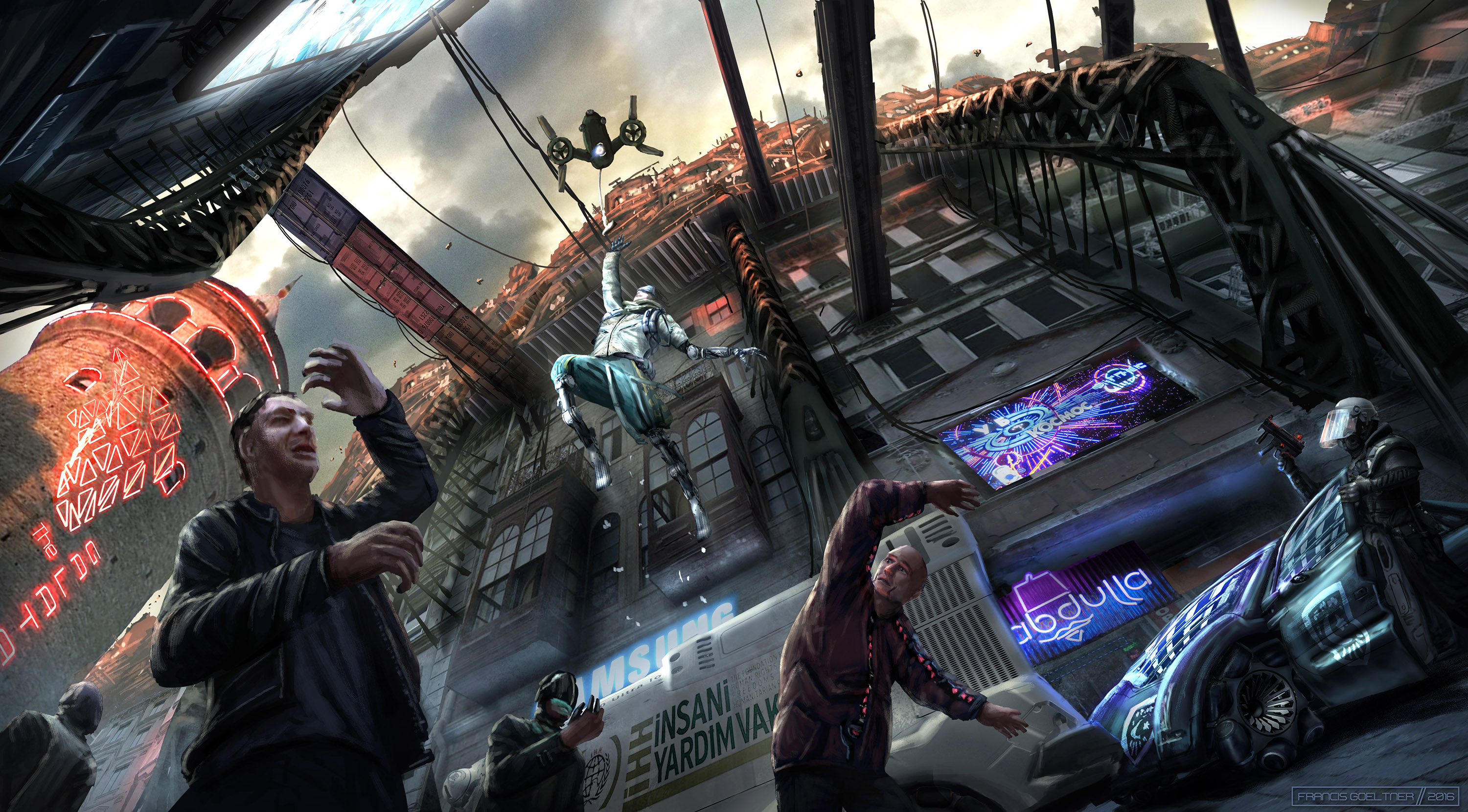 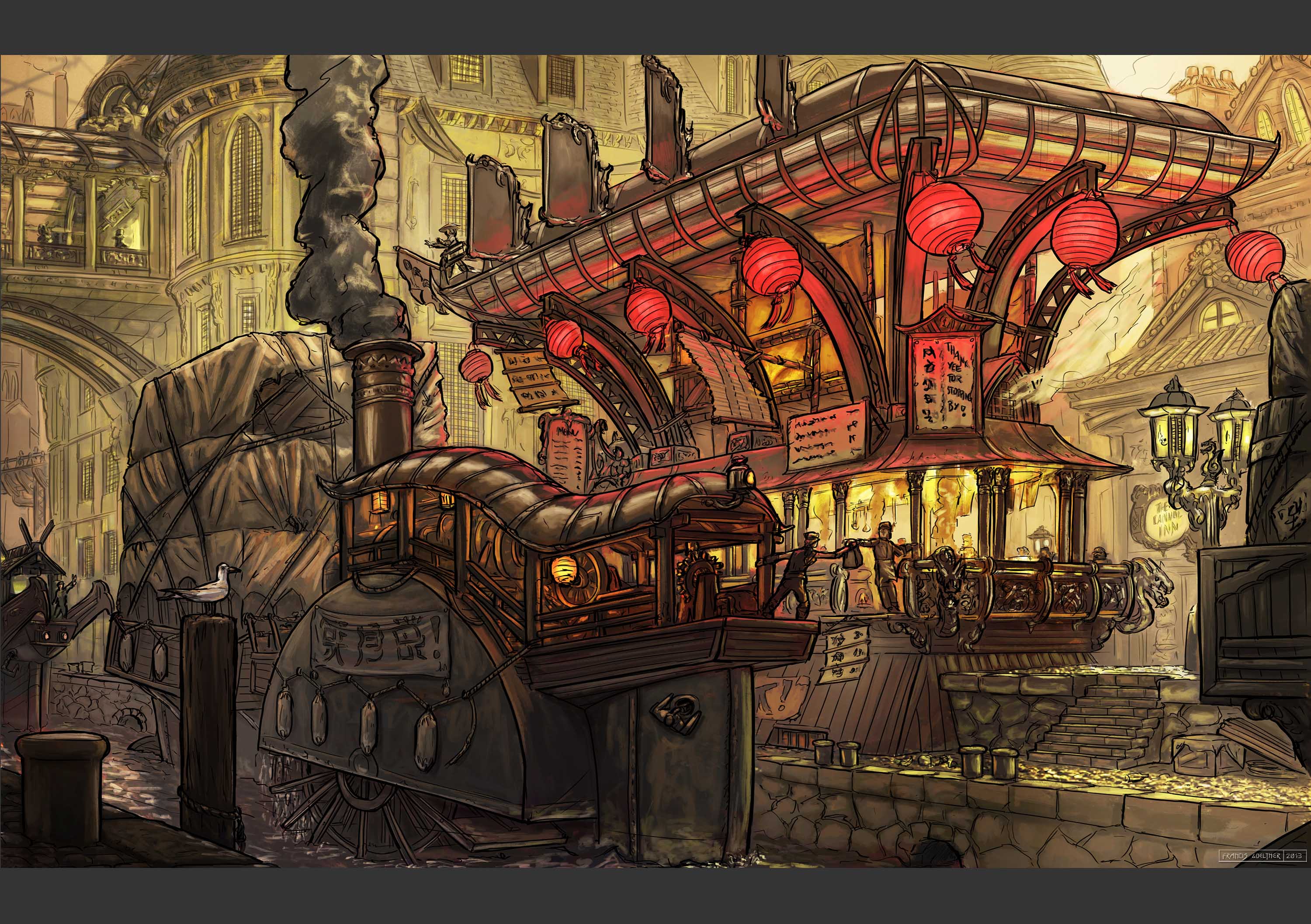 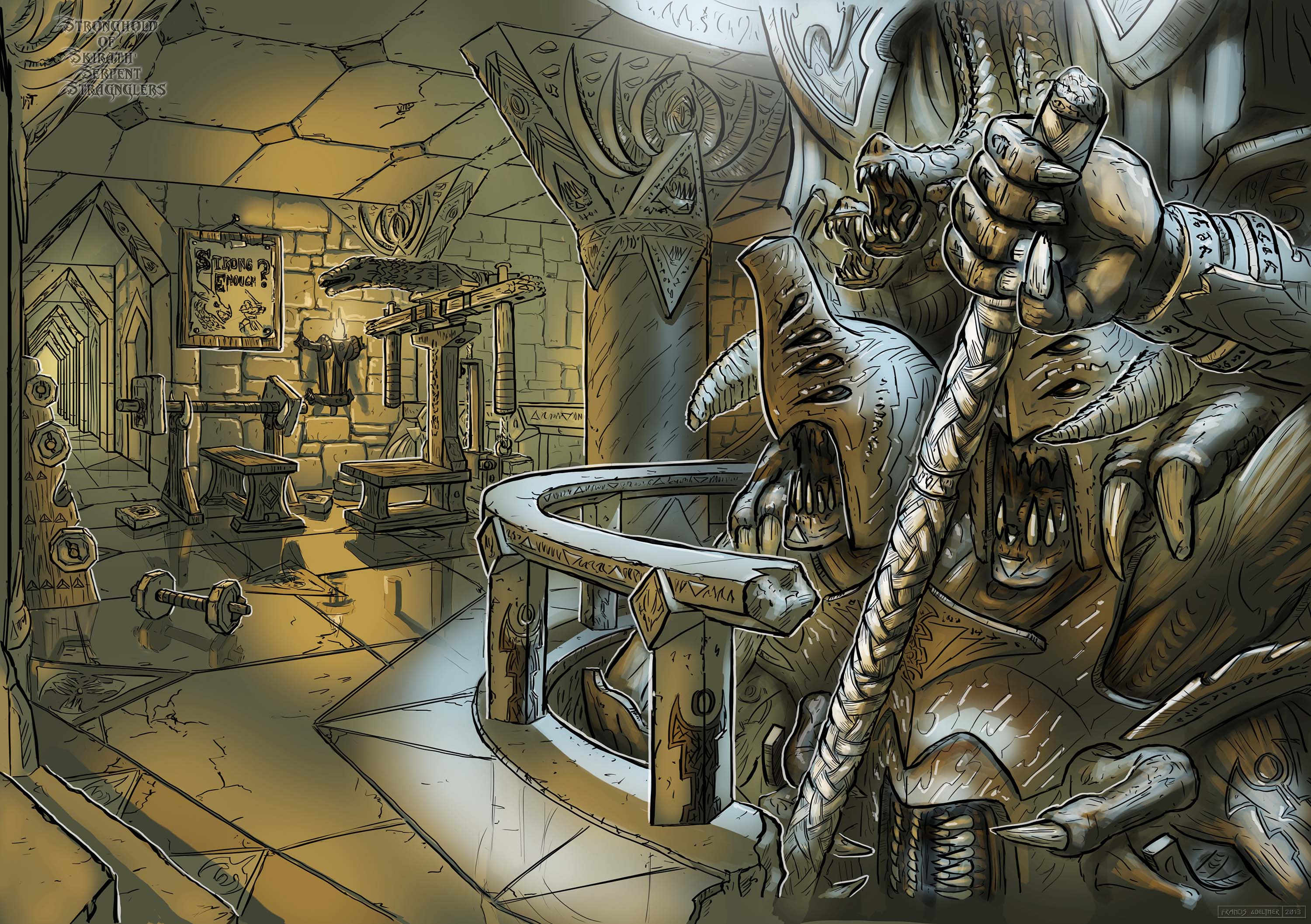