Alternate history video  game scenario. In 1900, industrial age Europe is hit by an ice age. Five  years into the event, this concept project focuses on the city of  London and sheds light on the living conditions, adaptation strategies  and struggles of the different survivor groups.

The Design of HYPOTHERMIA

This  section shows some of the concepts for faction bases / hideouts, which  incorporate iconic location types of late Victorian era London and the  changes they underwent to become viable shelters against the hostile  conditions.

Located where no right minded survivor wanted to be, due to the extreme exposure to wind and cold, the colony's founder - inventor Charles Lester - figured it to be in the perfect spot. The limited access to the top made the position defend-able against predators and scavengers and the never subsiding icy wind promised to power the salvaged industrial generator the inventor had refitted, supplying him with an abundance of electrical heating capability. That rare constellation convinced Lester to take in the weakest of the weak – children, families and old people. Barrel Town became one of the most healthy enclaves. It is almost independent from the omnipresent violent struggle for burnable material and satisfies it's food need by ice fishing and mostly crafting and trade of all kind. In addition the control over the makeshift bridge over the hopelessly stuck Tower Bridge road provides a steady toll income for Barrel Town. The biggest fear of the inhabitants is the threat of some mighty band of marauders actually attacking the enclave, if only for the wood in it's rustic little sheds... 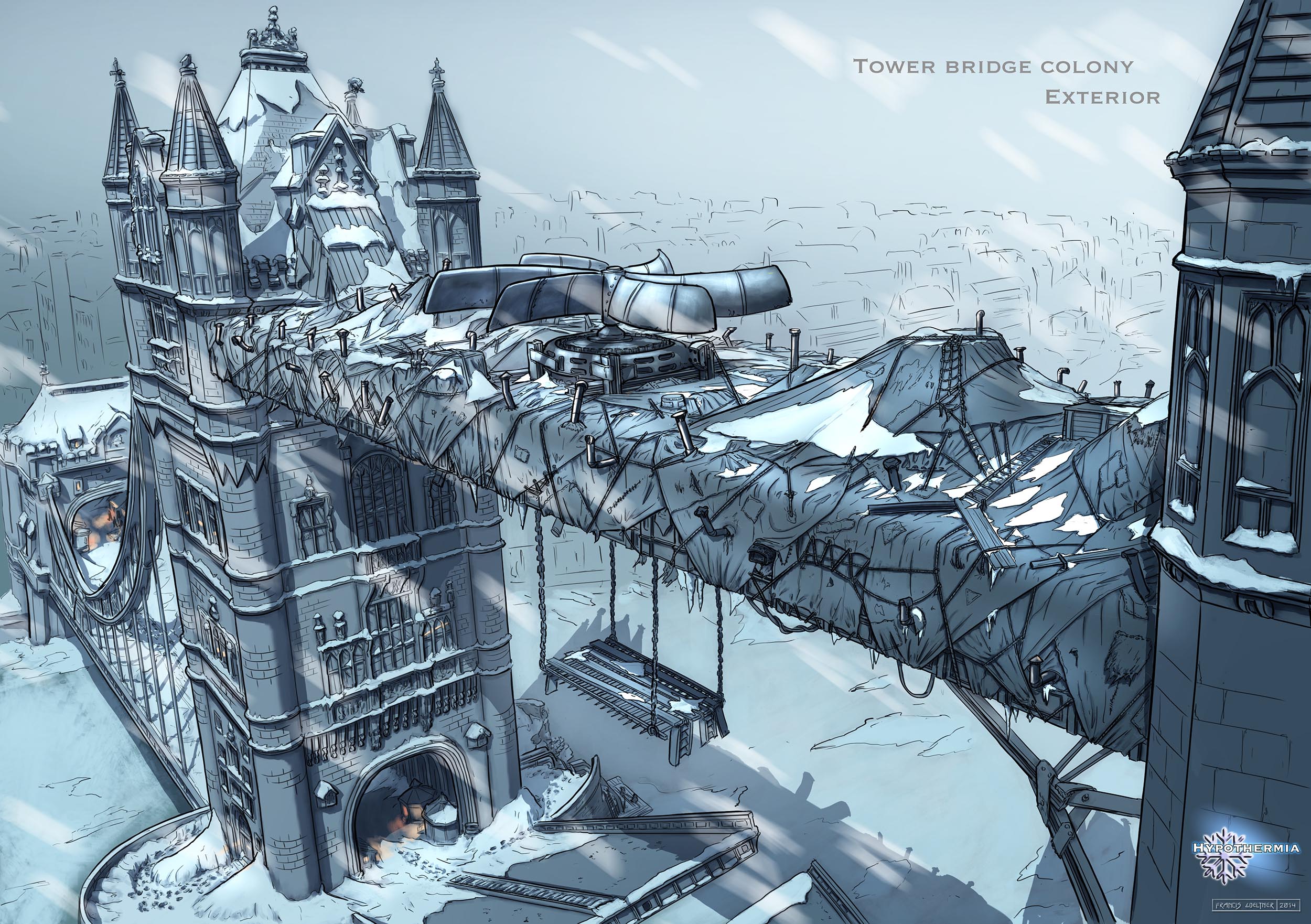 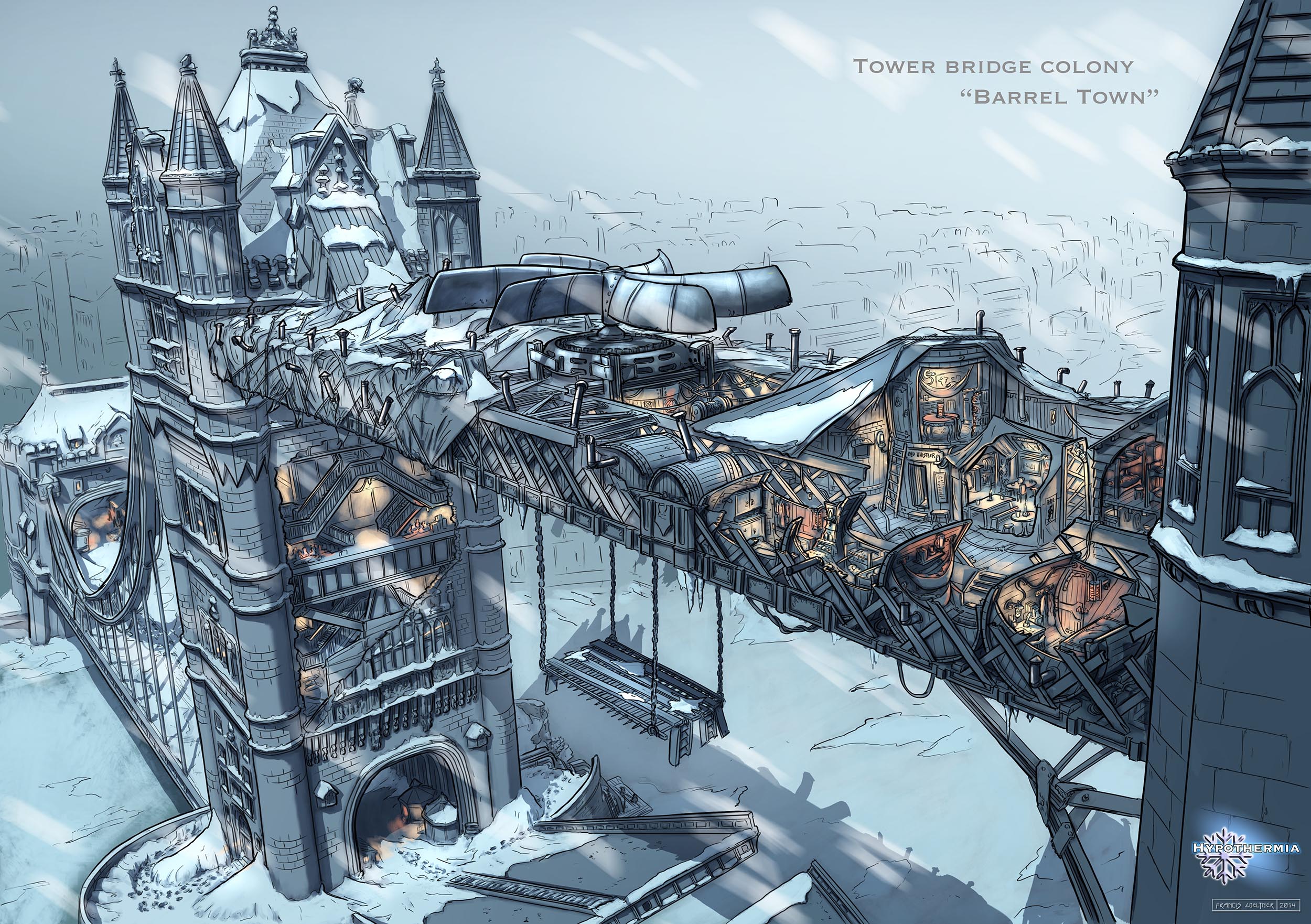 A whole net of shelters, hideouts and small communities was founded in London's subway stations, connected by the mostly subterranean railways.For barter between stations and for protection against hunters/scavengers from the surface, trading posts have been established like the one in this design. Since burnable material is extremely valuable, all makeshift buildings are constructed from salvaged metal parts of various sources.

One of the biggest shelters on the tube tunnel net is Notting Hill Gate Station. It’s upper level and platform hall has been sealed off at both ends and the innards of disassembled train locomotives are used to heat the space with it’s multi level makeshift structures. A big depot for equipment and burnable material resides on this level as well as the community's pride and joy - the greenhouse. 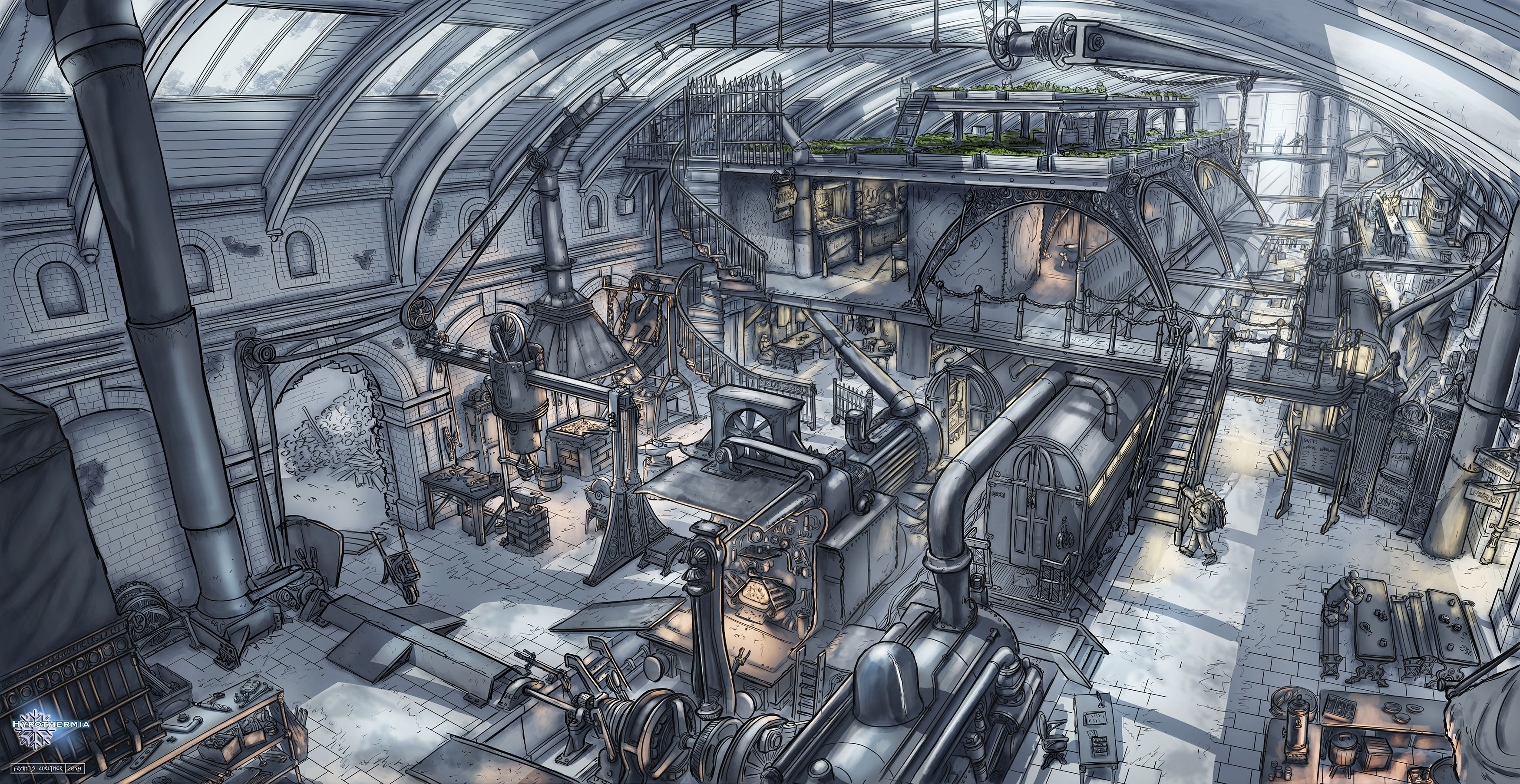 The lower level of Notting Hill Gate Station serves mainly as general living quarters for the inhabitants. Here the livestock is kept to share the warmth with the humans and both profit from the additional warmth from all the laundry work done here. The damp air and the dim lights also help keeping the hanging mushroom farm productive. As with the upper levels, immobilized trains serve as excellent housing units. 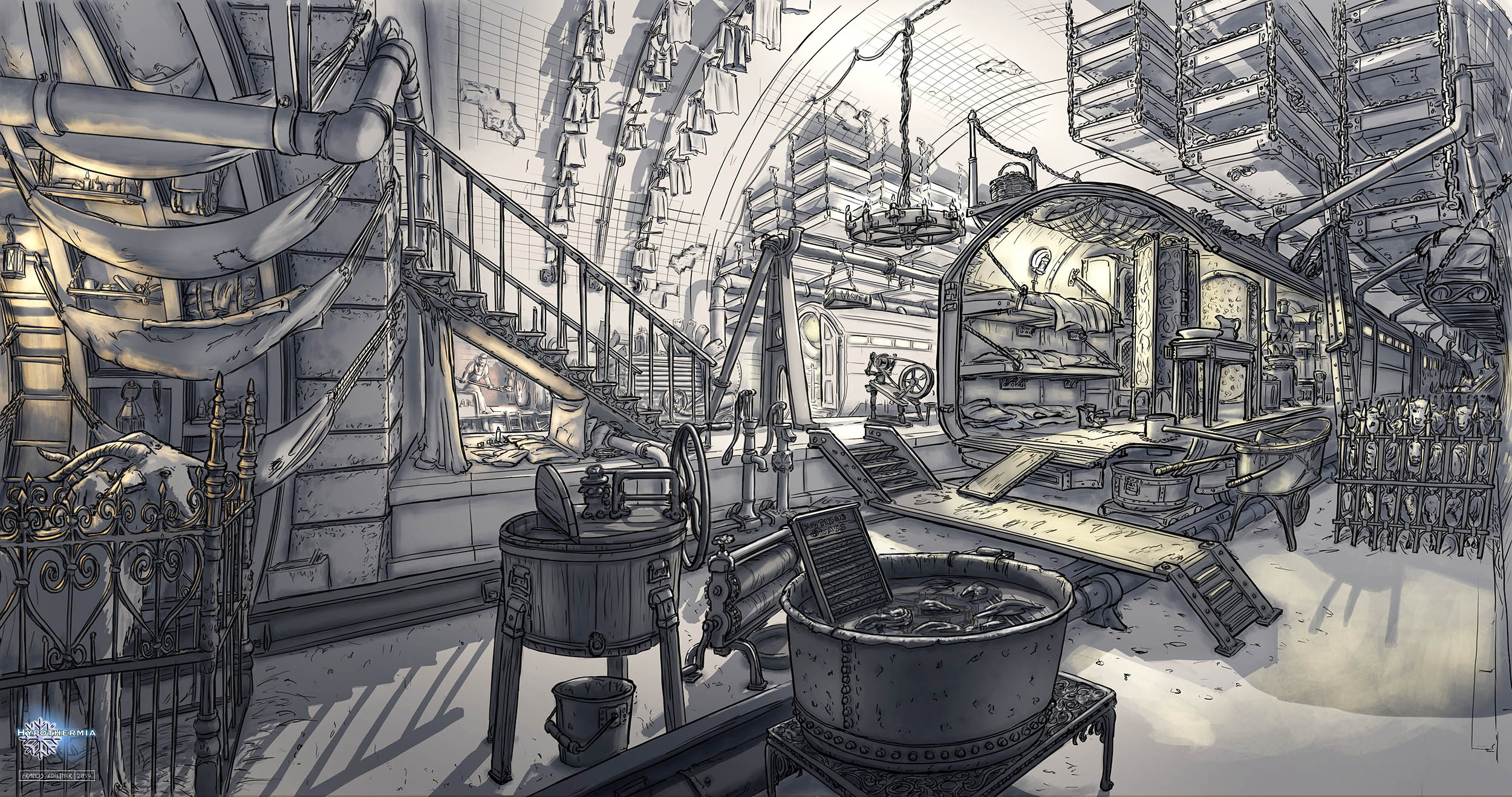 One of the view families in the Aldwych area, who survived totally without ties to bigger outfits or gangs are the Campbells. Four younger children, one adolescent son, their parents and the family dog have turned their former house on Aldwych road into a formidable hideout, stocked with burnables and food from the hunting and scavenging trips, which father and son undertake.

They survive not only by the witty tinkering of father Howard, but mostly due to the deserted & plundered appearance they instill in their formerly cozy home. 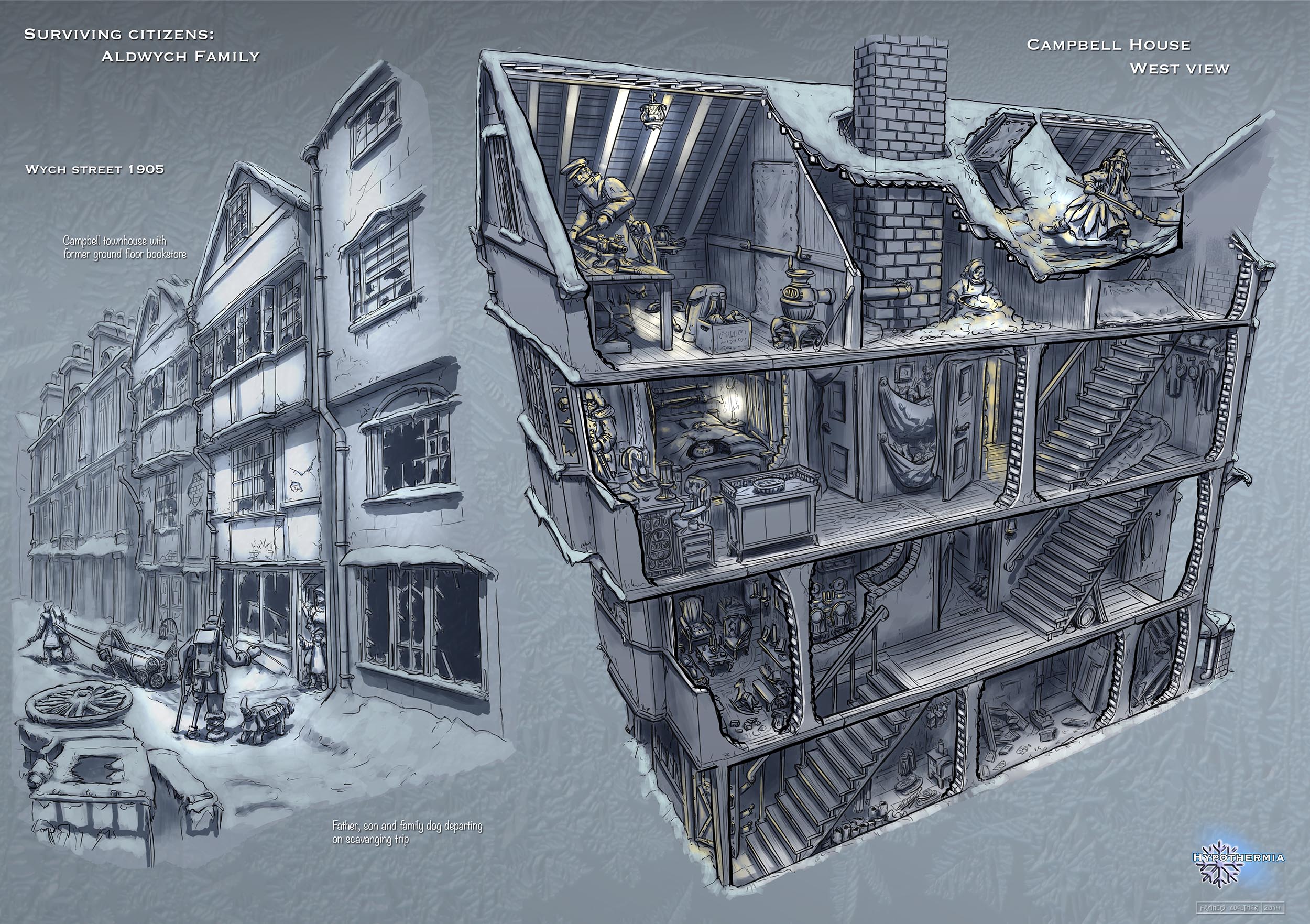 The Gear Grinders, a fanatic catholic split-off sect, which demonizes steam engines as the cause of the ice age, has set up it's headquarters inside the roomy cathedral of St.Paul's. They built a multi-level shanty town, figured out heating and ventilation of the huge room and organize their cruel raids against the remaining steam engines and the people, who use them for plain survival needs. 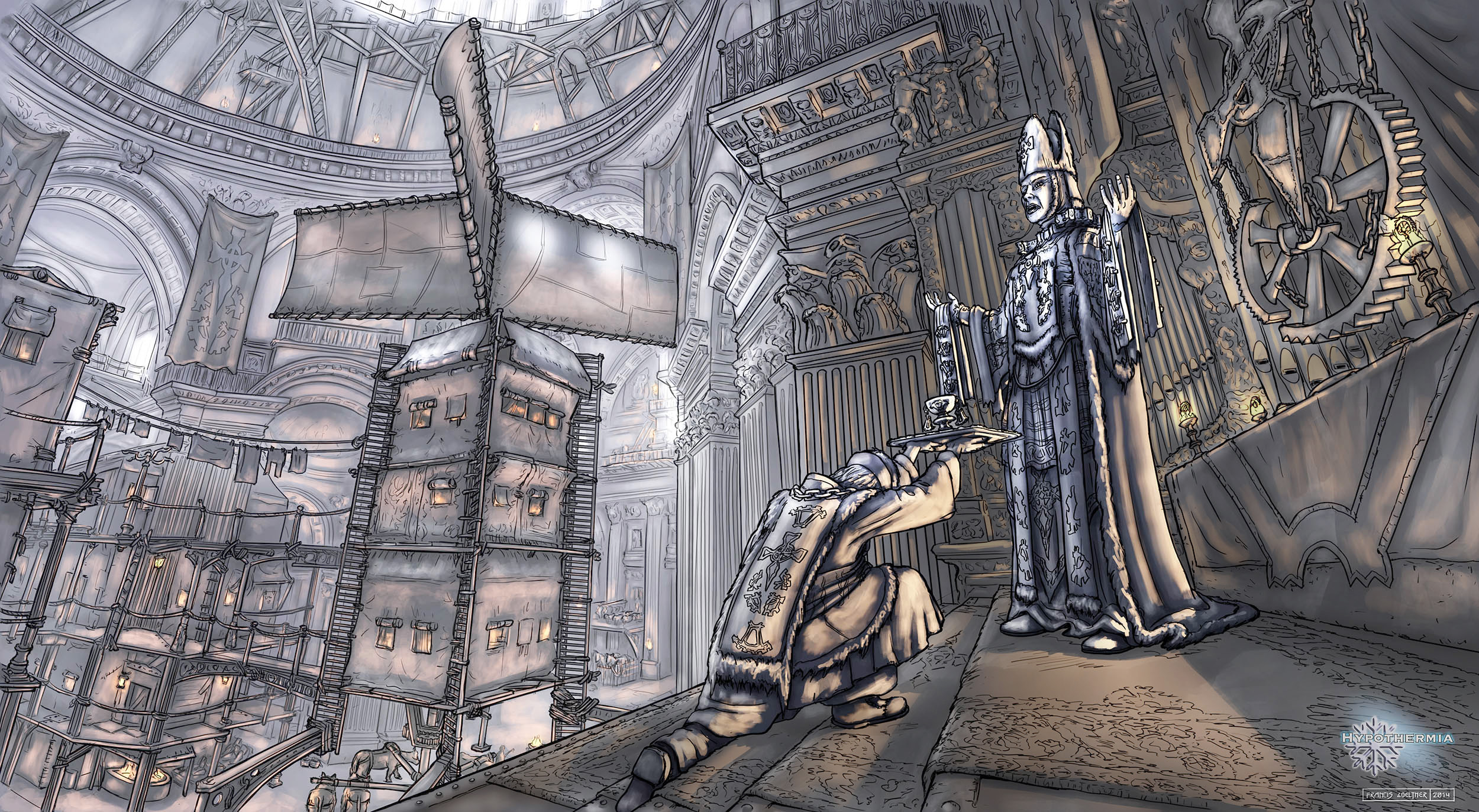 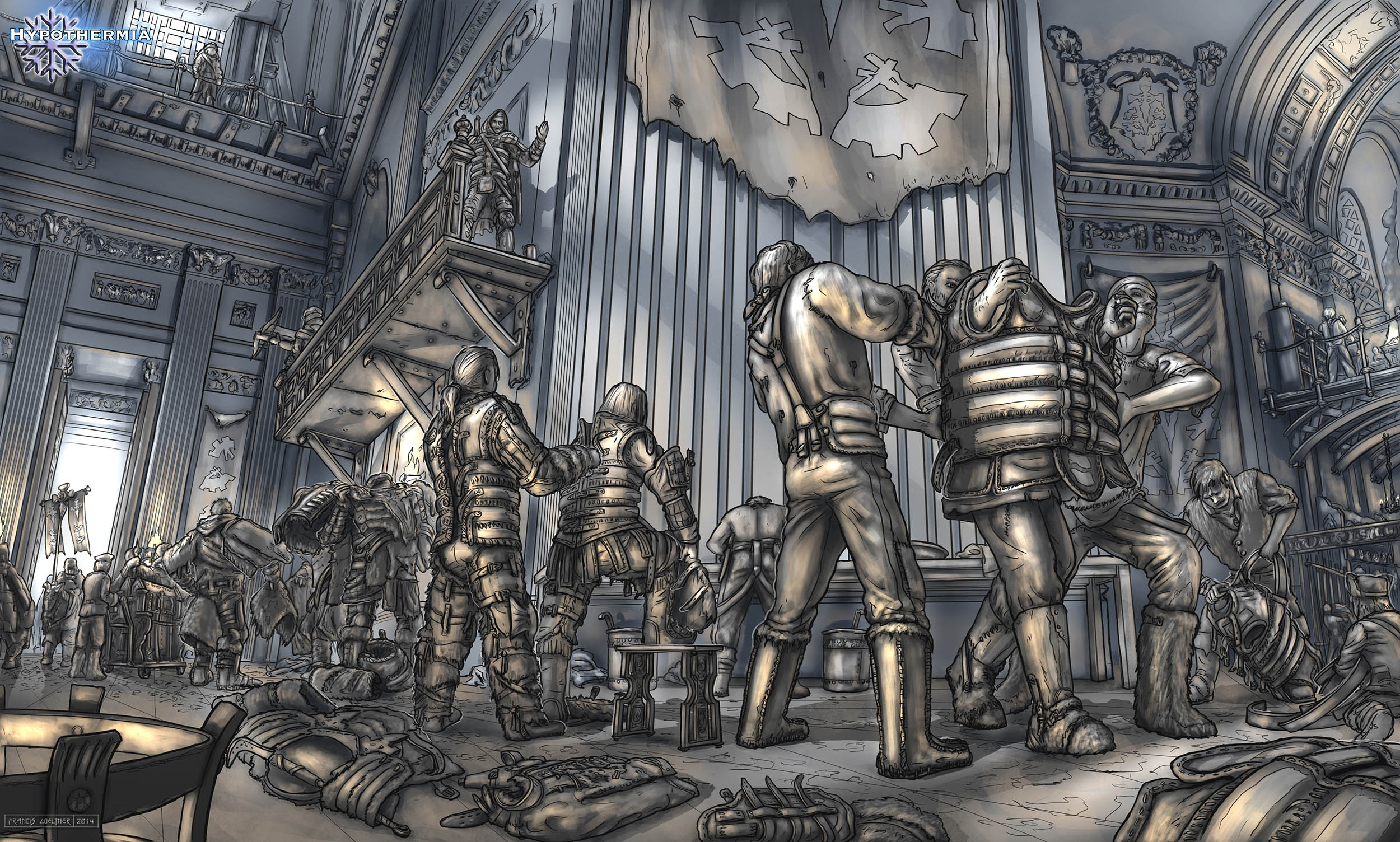 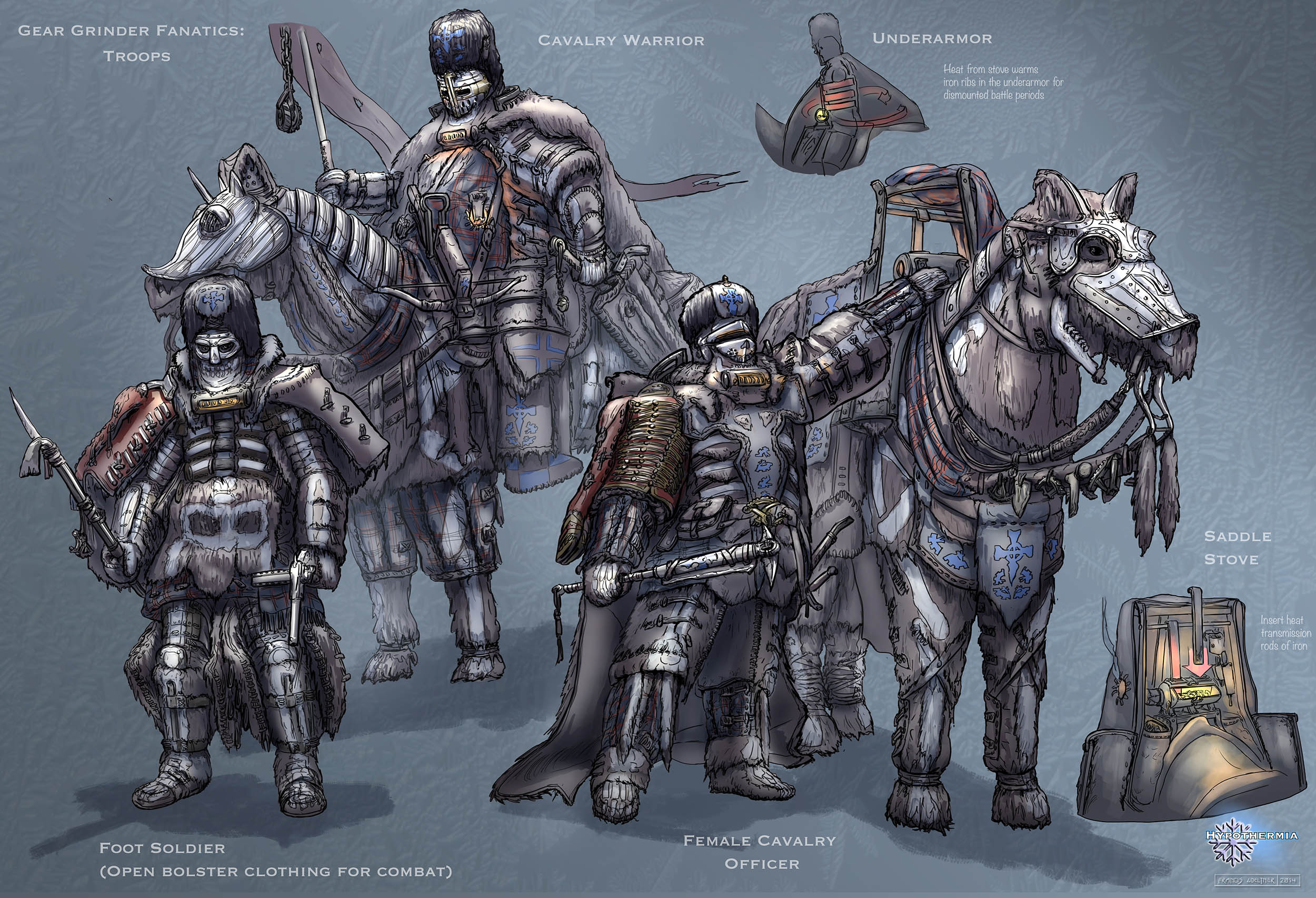 Among the survivors are former policemen, who formed a ruthless outfit of thugs. They fortified the sturdily build precinct building in White Hall and scavenge the city from there. For communication they make use of their supply of spooled telegraph cables, which they spread over the roofs by men in heated cable walker suits, to generate a fast spying net to react to any opening opportunities for a grab at valuable food or fuel supplies.

One of the interesting locations of the scenario is the HMS Goliath, a pre-dreadnought warship of the British navy, that wrecked during the first storms of the ice age on the downtown shores of the River Thames.

Since the sailors refused to abandon their ship, the whole vessel had to be reconfigured to deal with the hull's inclination. This also reflects in the officer's bar and situation room, crafted into the former forward magazine.