Another new album page is called for with the second one getting to annoying to manage (Man I hope the ArtStation team gets around to thinking of a new, more practical mechanism to handle that). The topic (as before) will be studies, sketches, speedpaintings or studies in my pursuit to grow as an artist. Enjoy - If you can ;)

I found another Jamie Jones painting, which I wanted to get into and try to dissect a bit. It has all the good stuff for sure from the composition to a nice warm bounce light and of course… a Mech! :D 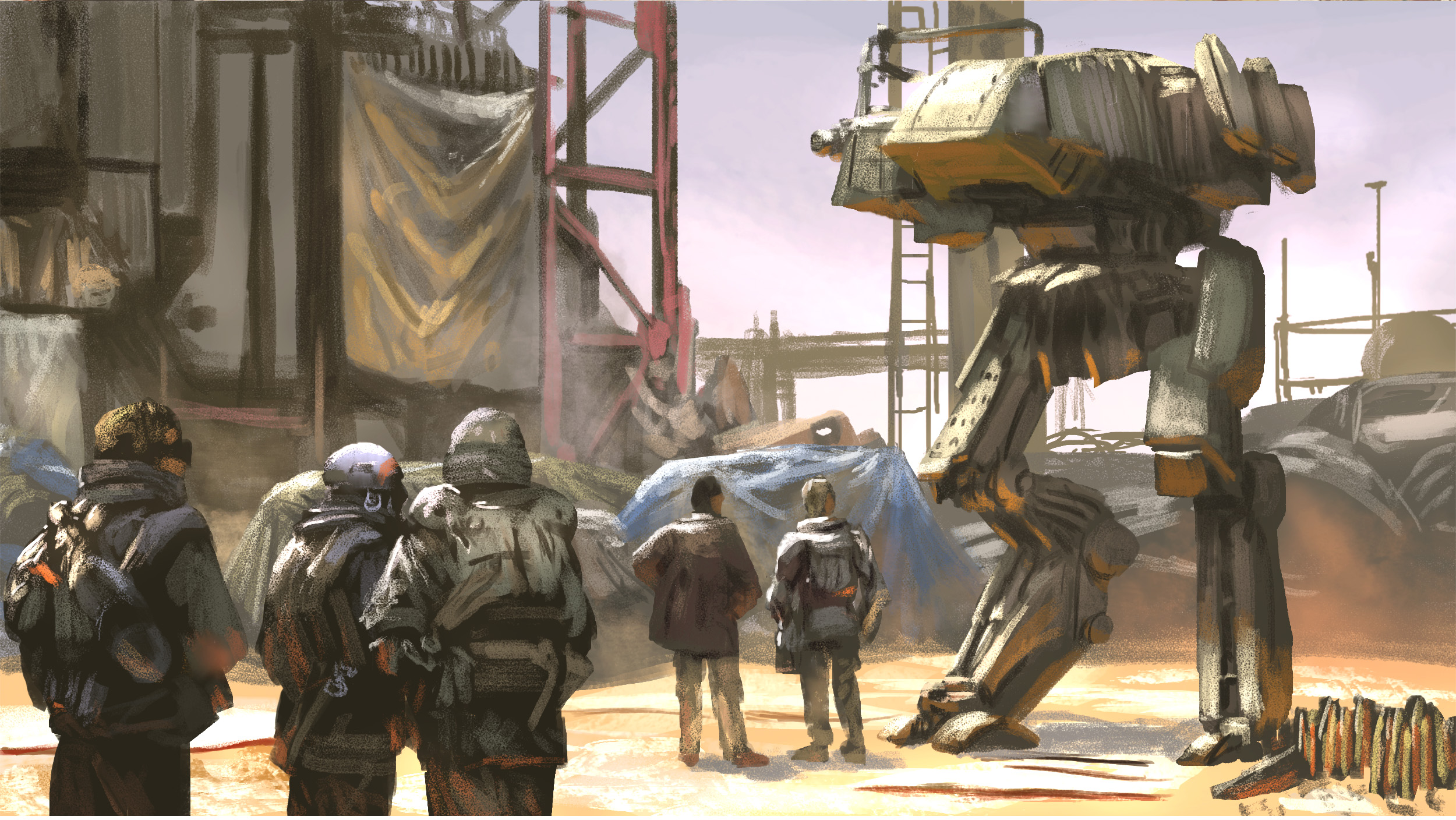 Another study of a cool, if not topic wise a bit unusual piece of the master himself, Craig Mullins. Simple subject and spatial setup, but as always layers and layers to discover. 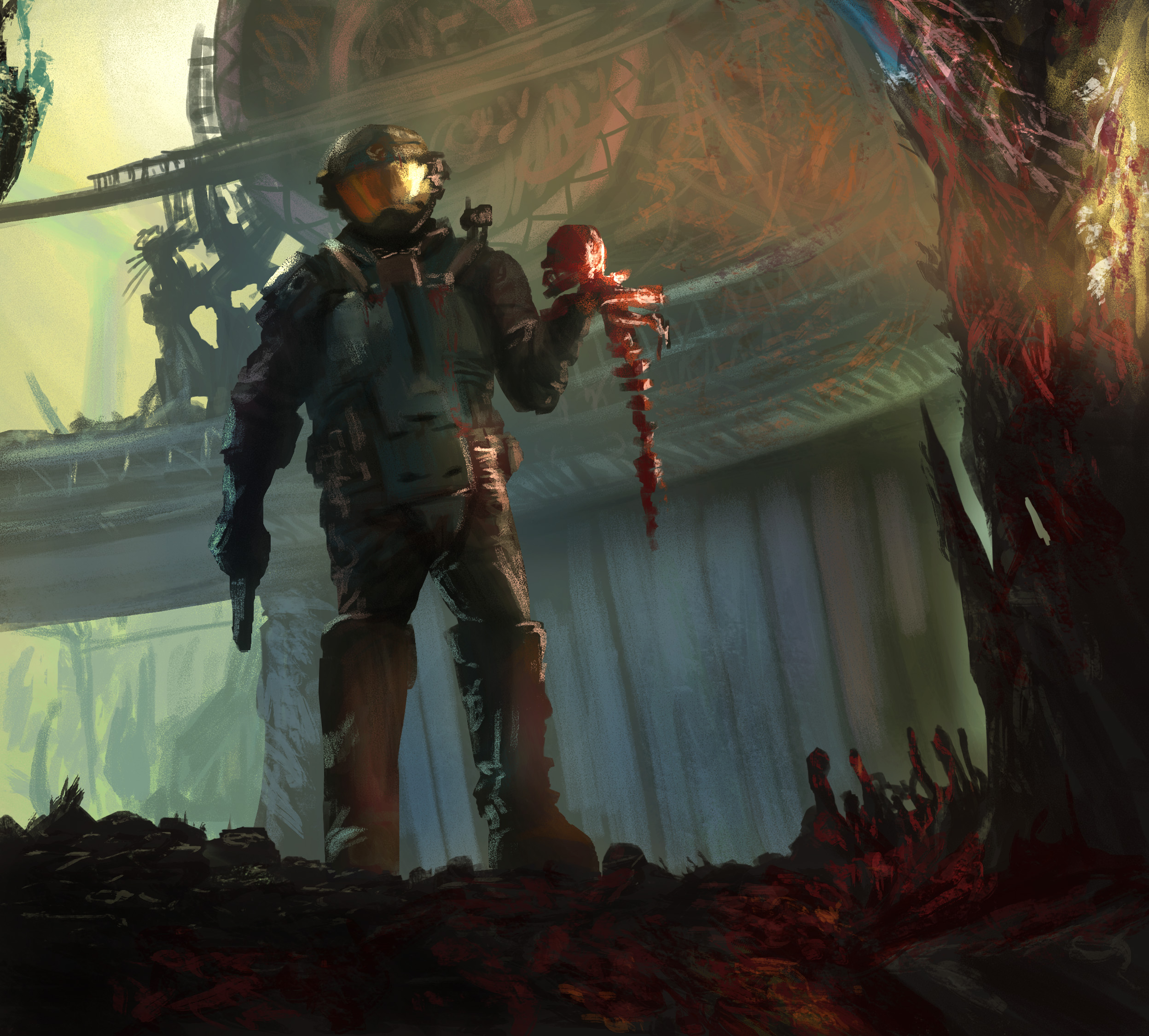 Another junk bot but this time not only the machine, but also the human who controls it. Young Kumiko goes through her Karate Kata inside the beached wreck of an old ship (because why not if you have the choice ;D), stringing her clunky companion along via neural interface. 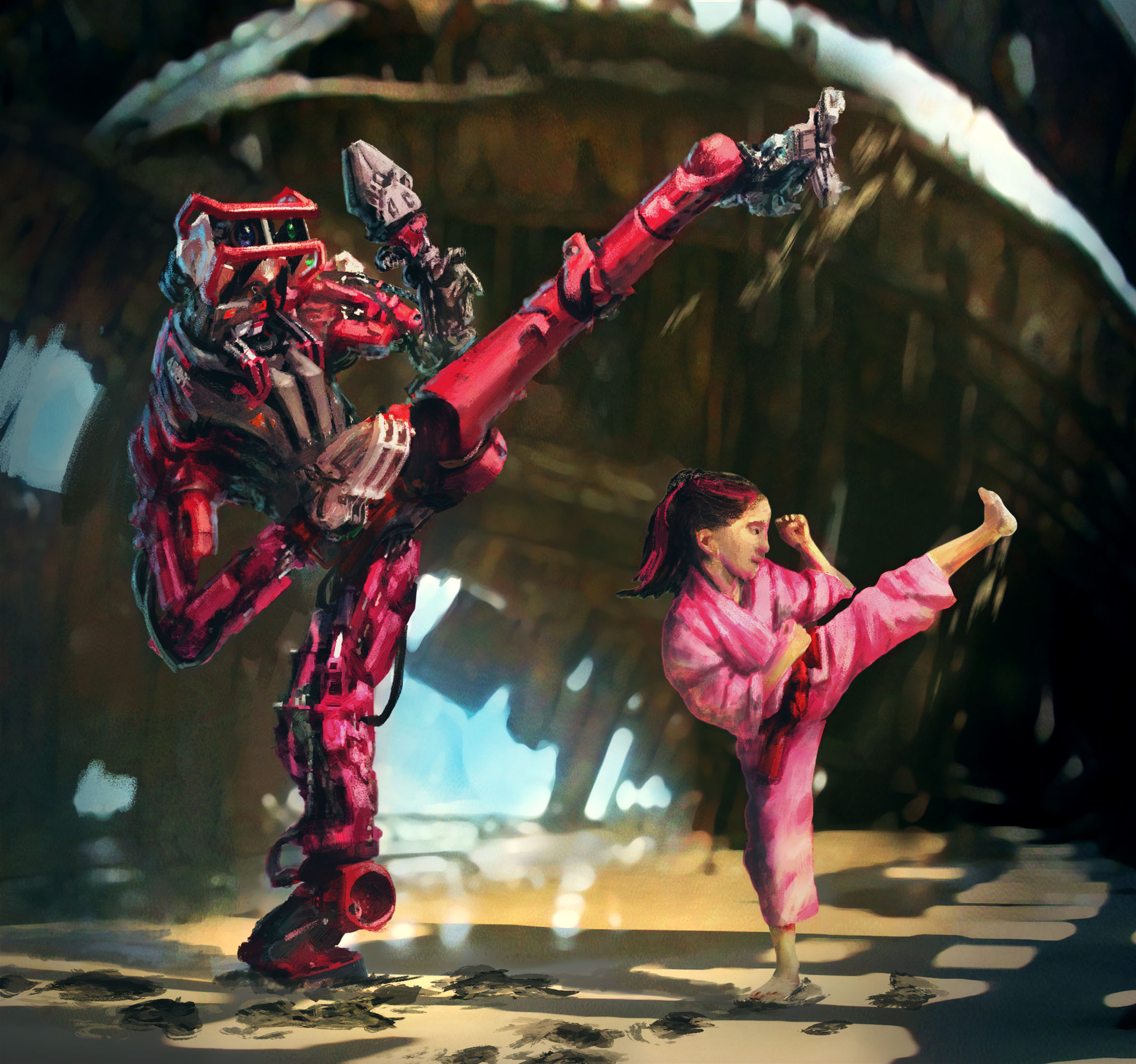 Getting some more inspiration from one of the masters. Great light, sky and mood in this western-y piece by Jamie Jones. 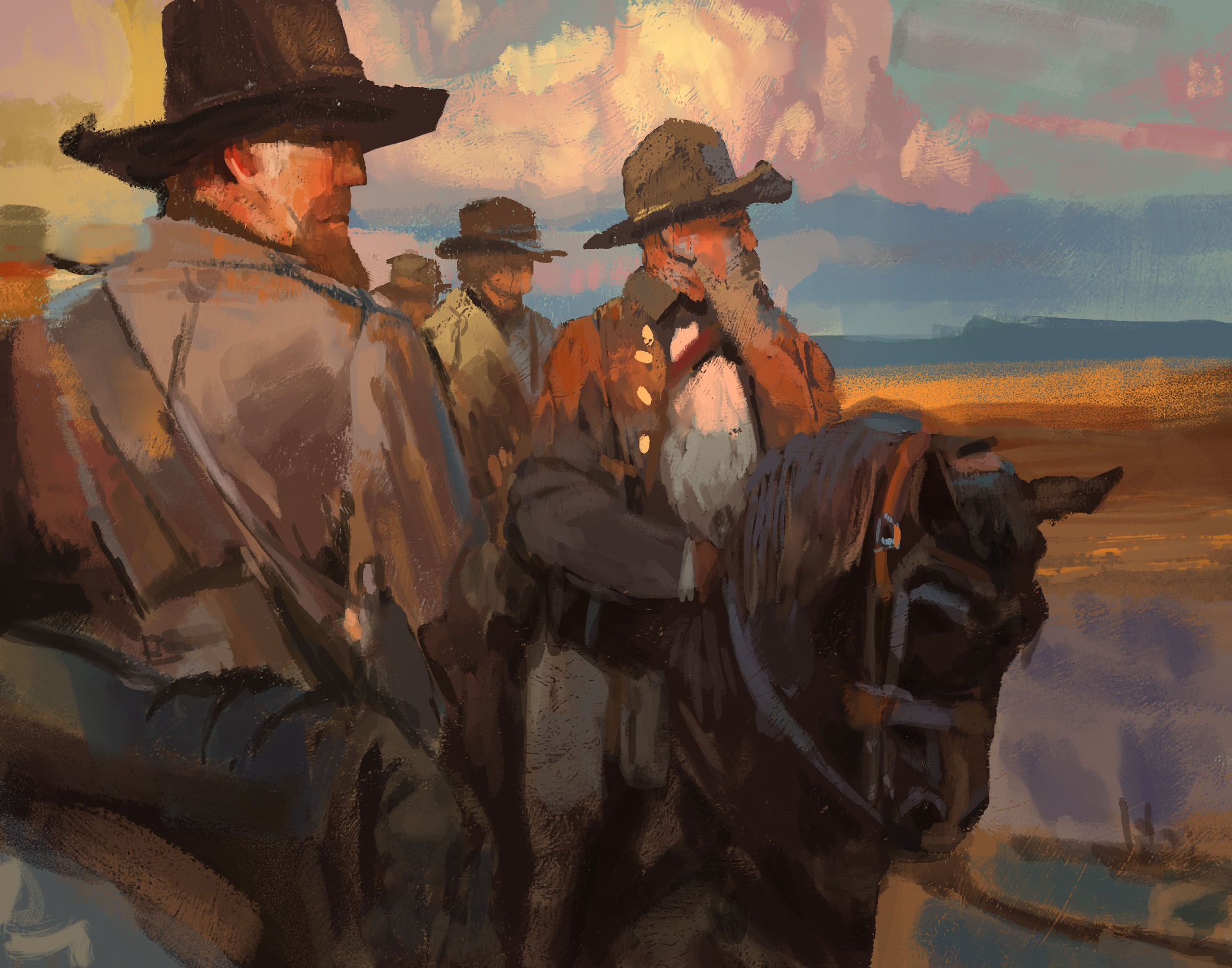 I felt like taking a good close look at another piece of the master himself, Craig Mullins. I really liked the simple but kind of idyllic subject matter. 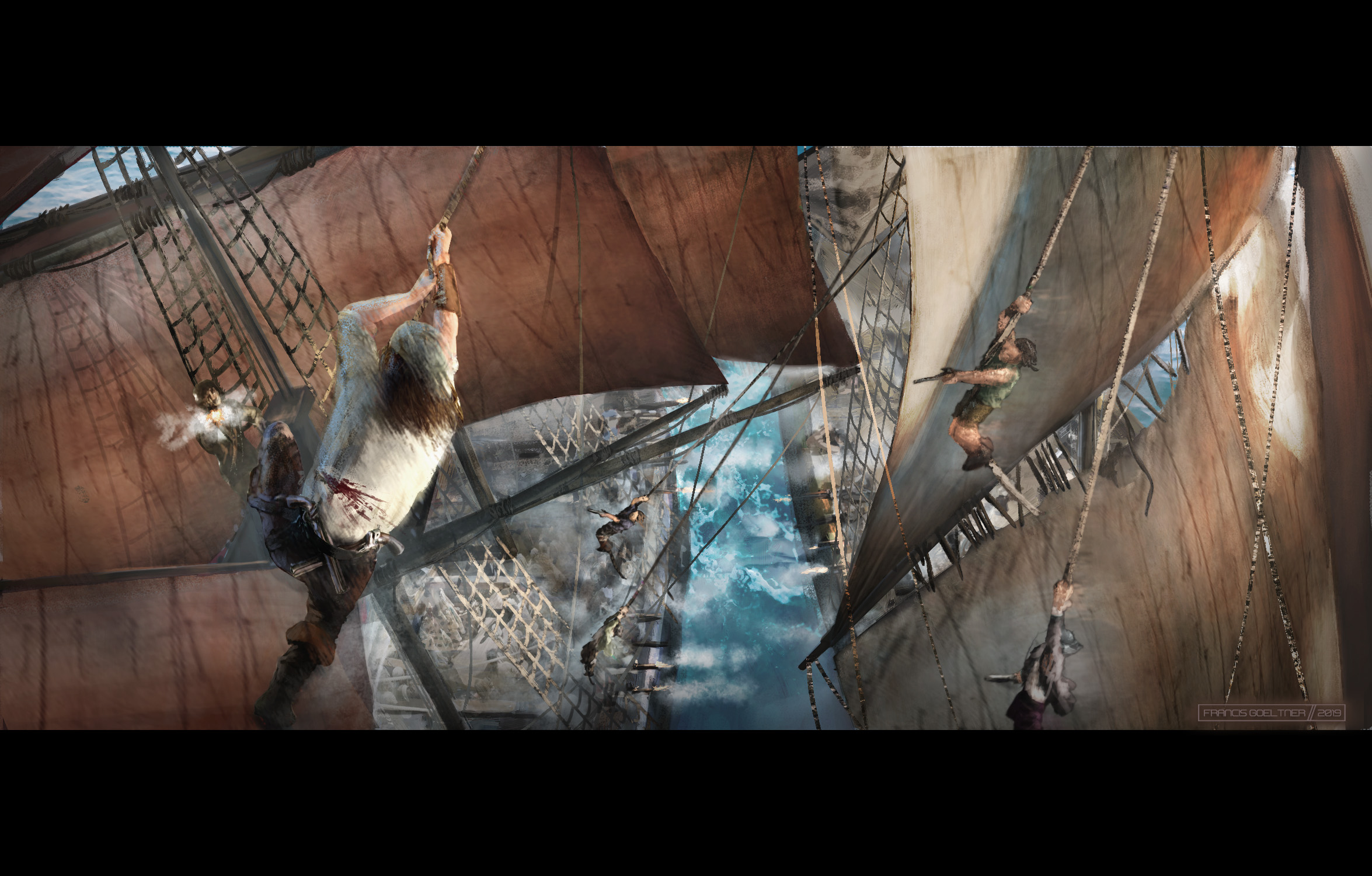 Let’s see, what rich entertainment cliches did I already cover regarding pirates? Politics & betrayal, treasure hunt, sailing ship, ship-to-ship cannon battle, duel on deck… All check. So what to do next? Oh yeah: How do you get from cannon standoff to crossing the blades close and personal? Yes, by some daring cinematic boarding action! So here it is, the cliche-loaded rope swinging boarding party, trying to come in high to hopefully surprise the busy defenders on deck. Hopefully that one guy up on the mast does not spoil the surprise... :D

It turned out to be quite a tricky piece and I’m not entirely happy but it should do for the time that I could commit to this. 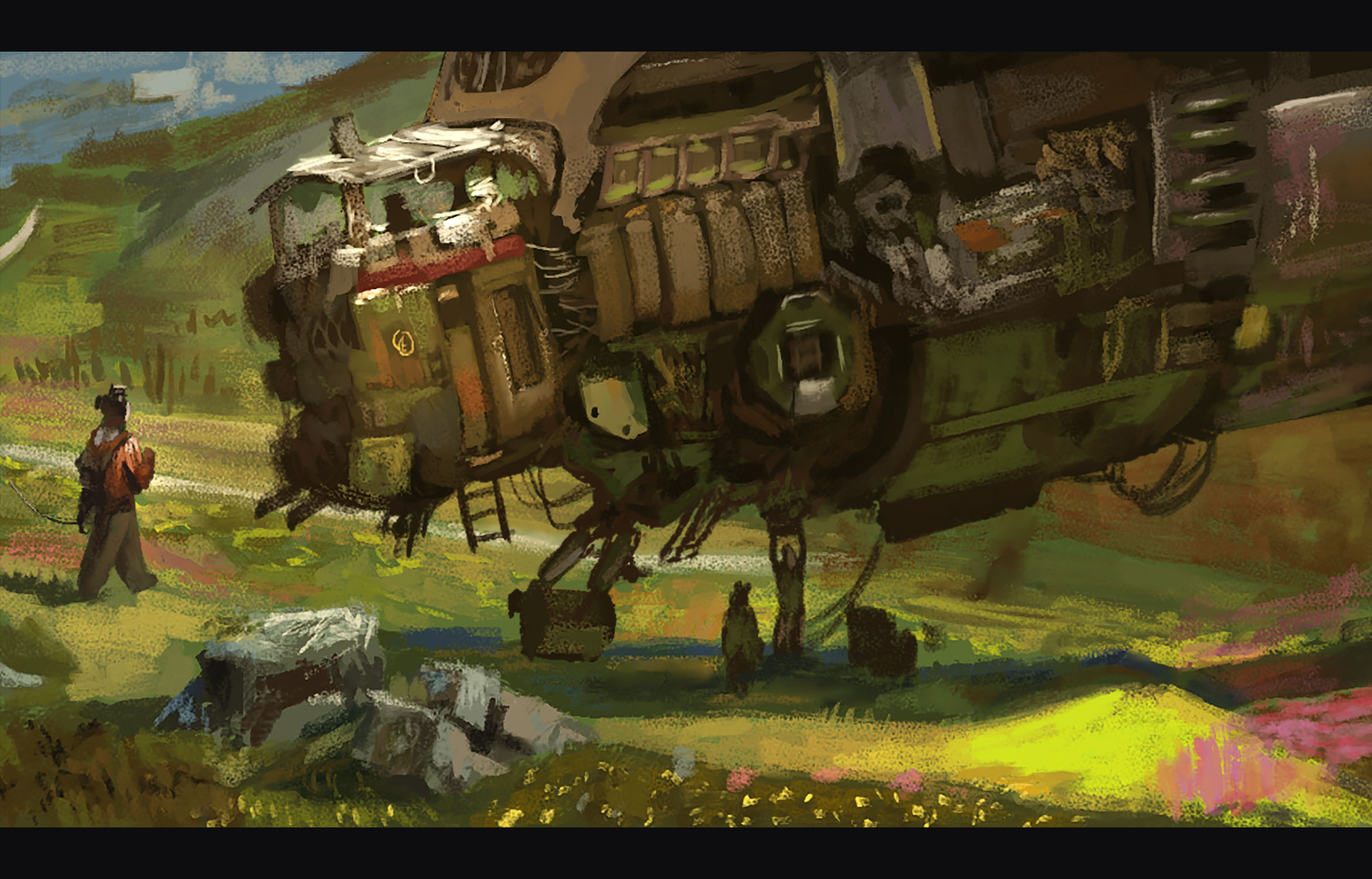 Another slight variation on the siege weapon construction scene from my last post. 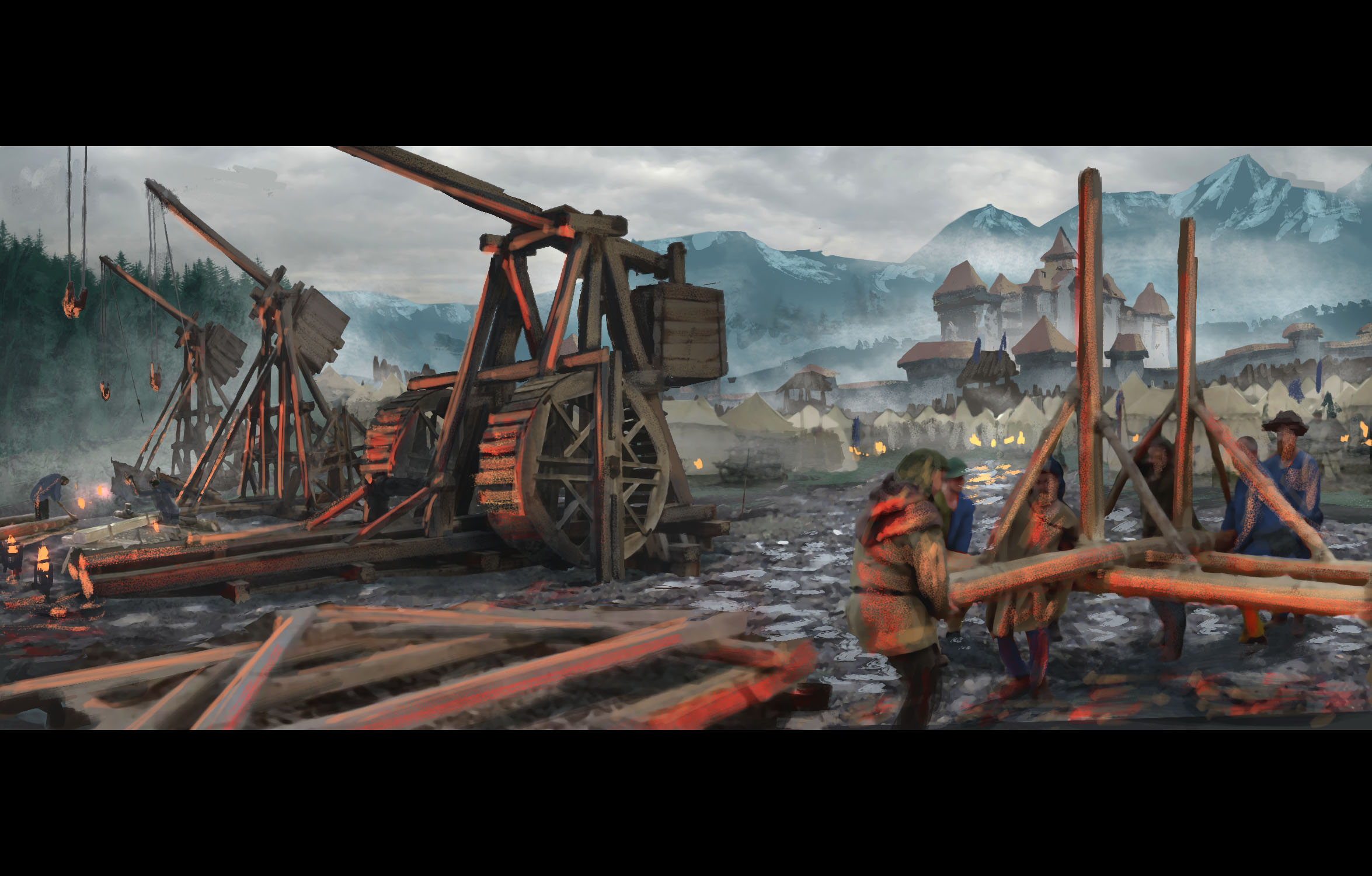 Environment design for medieval/fantasy project, showing the inside of a siege camp, where some big castle busters are put together. 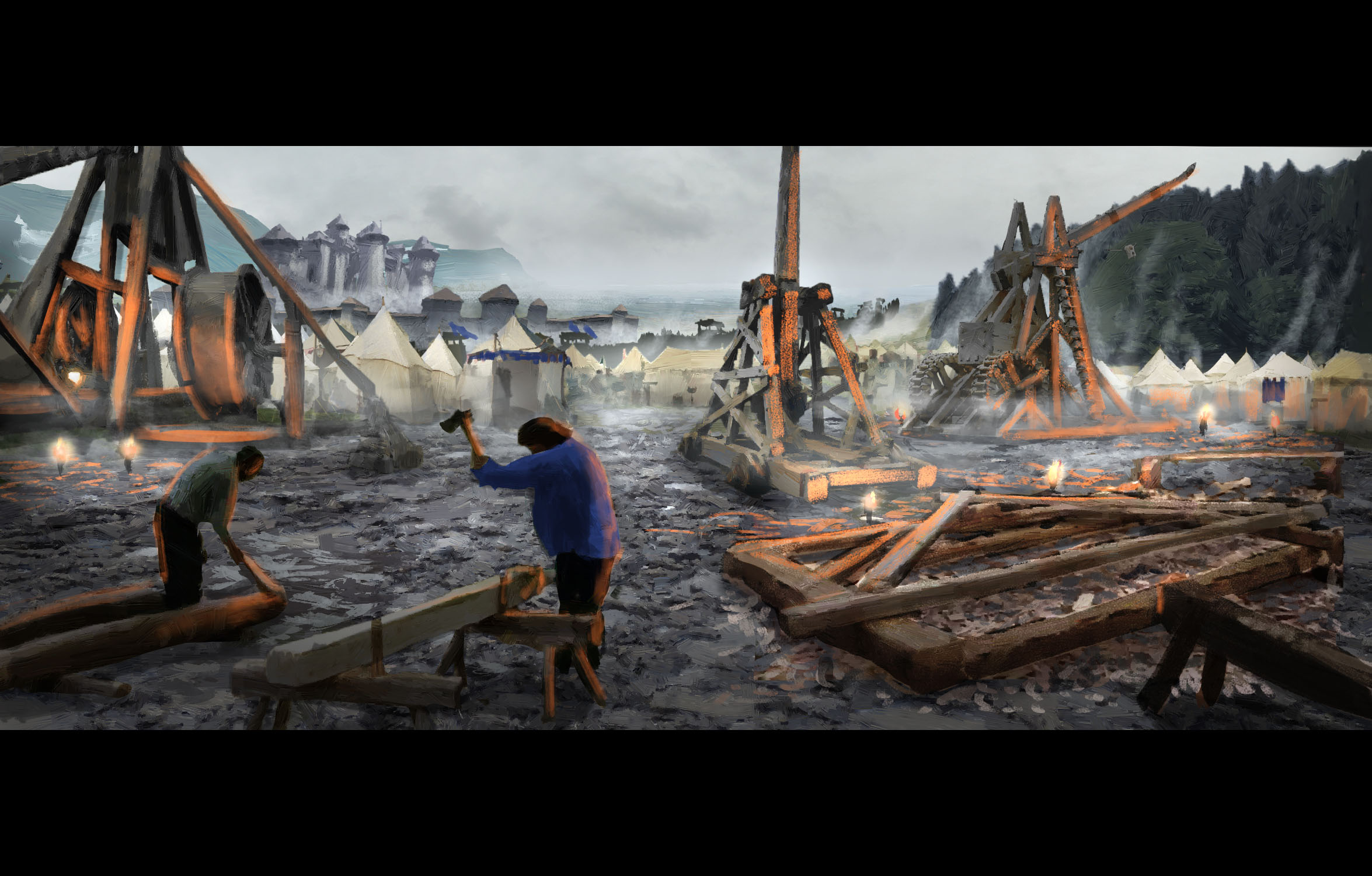 It has been some time since the last junk bot, so I thought it was about time ;)

This one was created from a bunch of bashed photos of random tech pieces and a quick paint out. 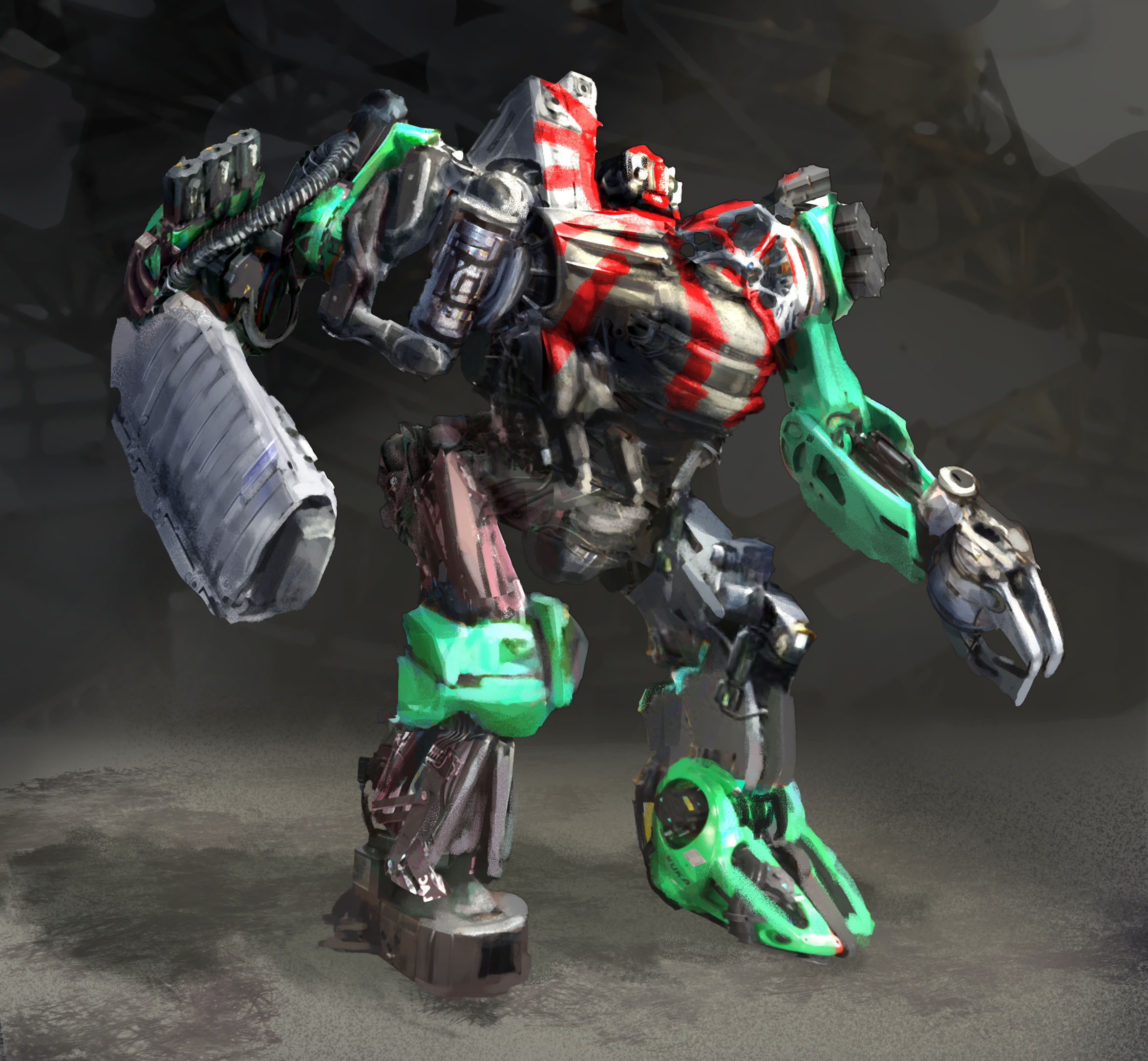 Wow, already double digits on the John Park studies? Yeah well his work certainly has earned it. This one is again from Dumbo and one amazingly energetic and  atmospheric keyframe concept. 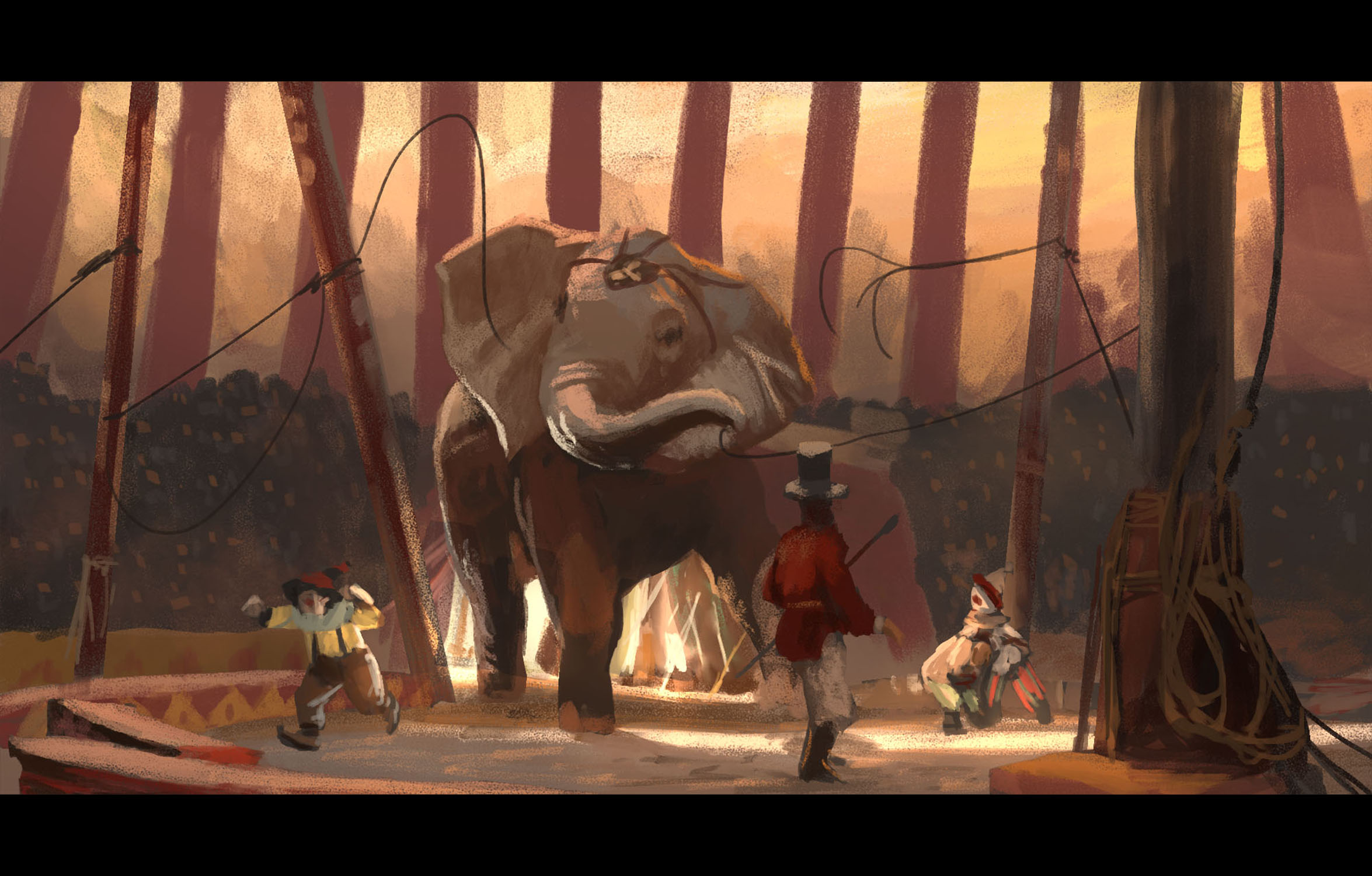 Back to turquoise waters and unshaved scoundrels! :D I also wanted to try this weird image split composition.

This time with a little keyframe, showing the forging of an alliance between two captains, which is about to be interrupted rudely by a paid assassin, waiting for the right moment to strike. 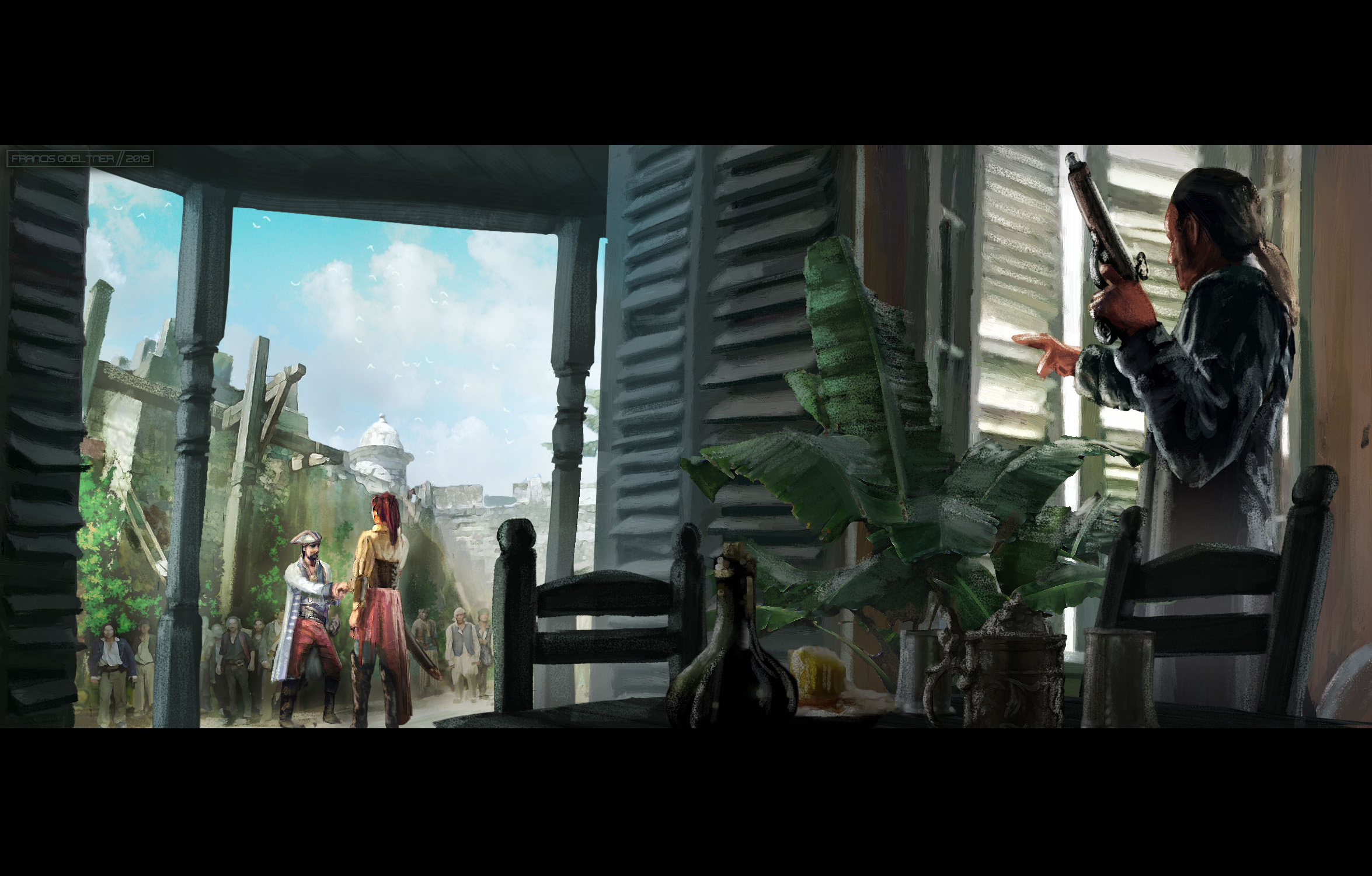 We got some more weird dimension mixing going on! This time between deep Africa and some Icelandic glacier cave, in which a part of a traditional Dogon village appears all of a sudden and messes up the icy cold. THAT is some serious climate change ;). 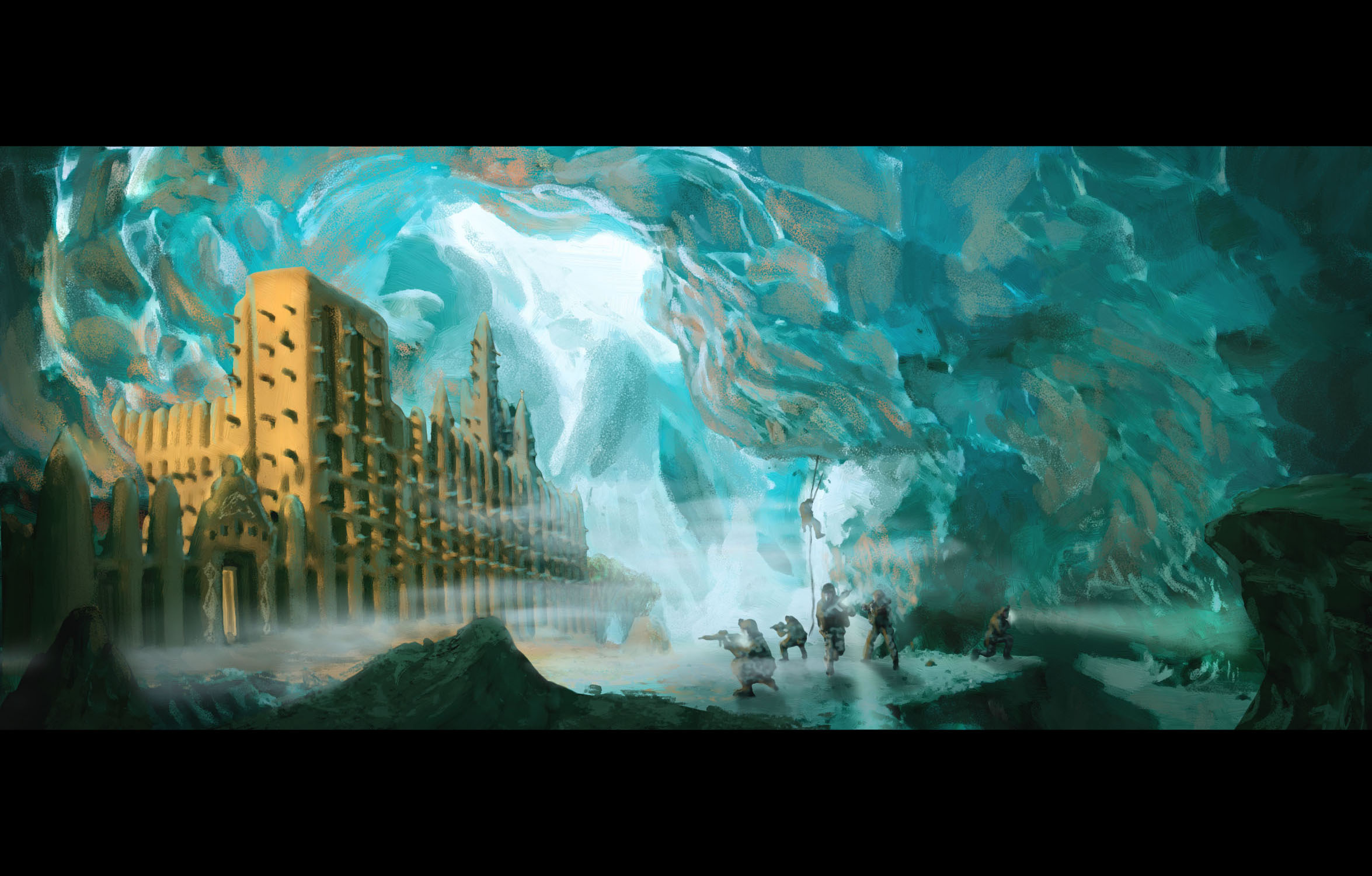 Okay quite some pirate cliches have already been checked in the last couple of weeks, but one that definitely is still missing is the good old buried treasure chest. Well this speed piece shows how some treasure gets hidden in the first place, depicting a landing party of mixed suspicious characters, hauling a part of their riches for ‘safe storage’ deeper inland on a remote island. Hopefully the map making guy is not too drunk at this point ;) 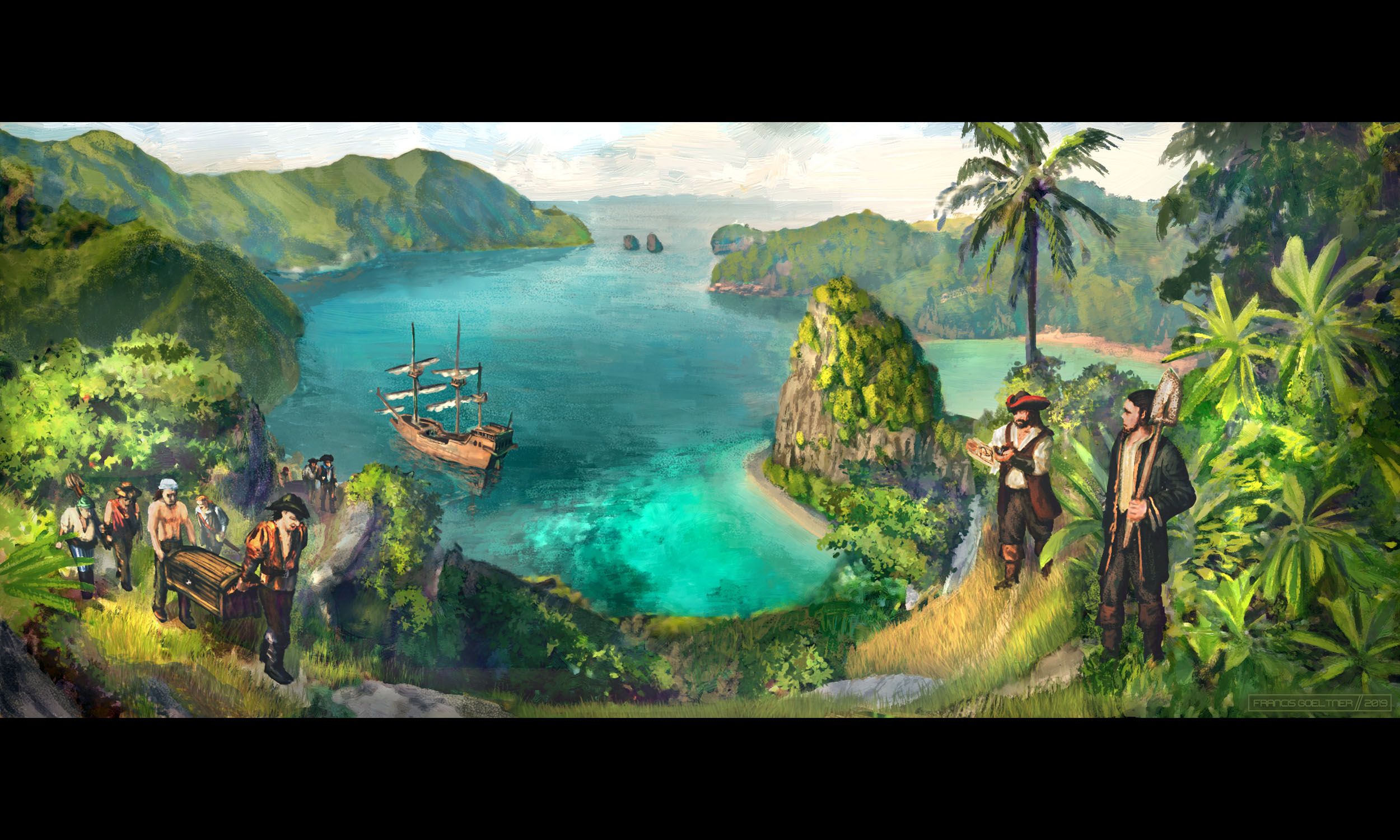 Long time no see, Mr. Park! :D This one once again a study of John Park’s awesome work, particularly of one of his concepts for Disney’s real life action version of Dumbo. I just love the colors and the rich temperature in this piece. 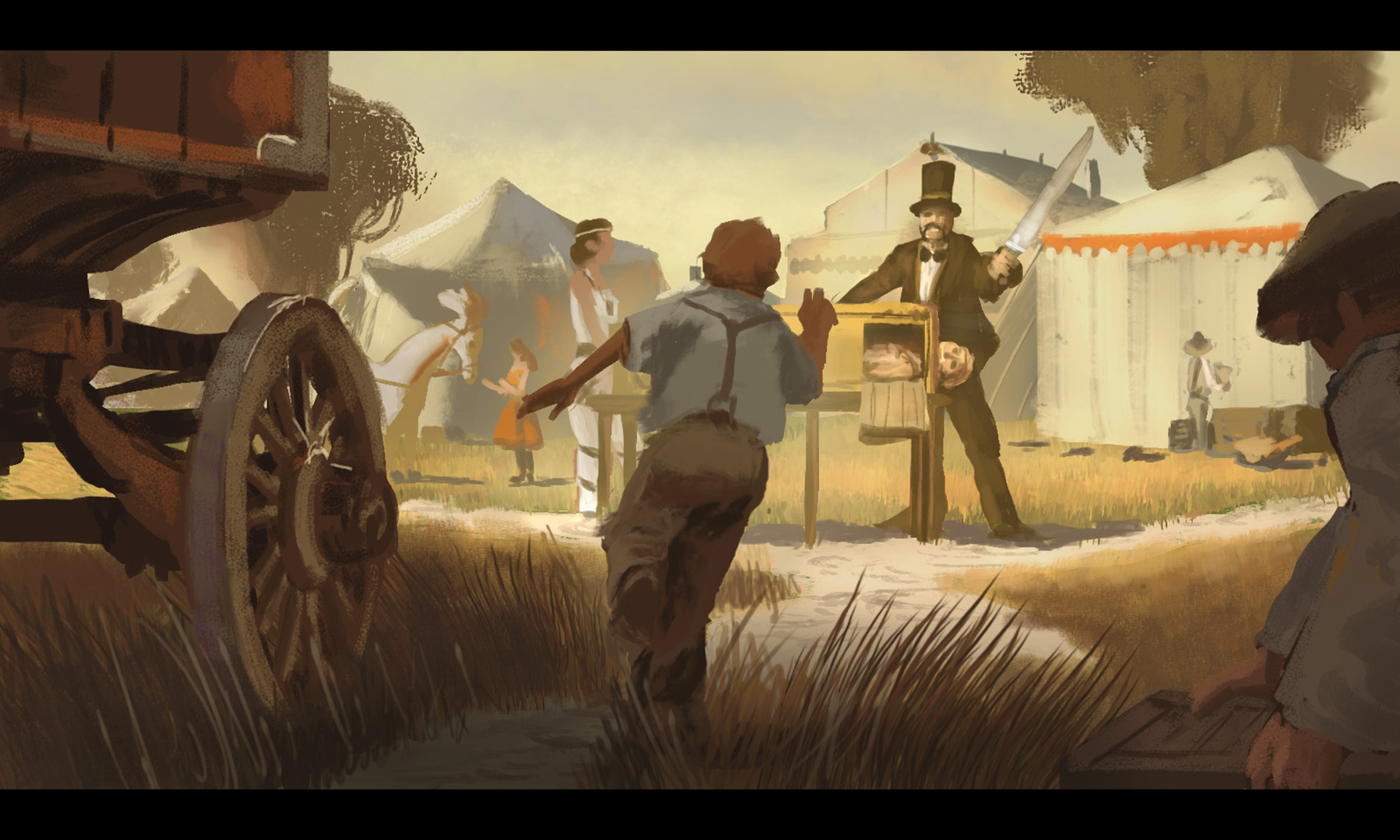 More dimension rifts are happening all over the world! This one have a piece of Sao Paulo Favelas appear on top of a drab Moscow high rise. Since that blocked the normal access staircase it made for an awkward and  stomach rattling approach for the Russian scientists. 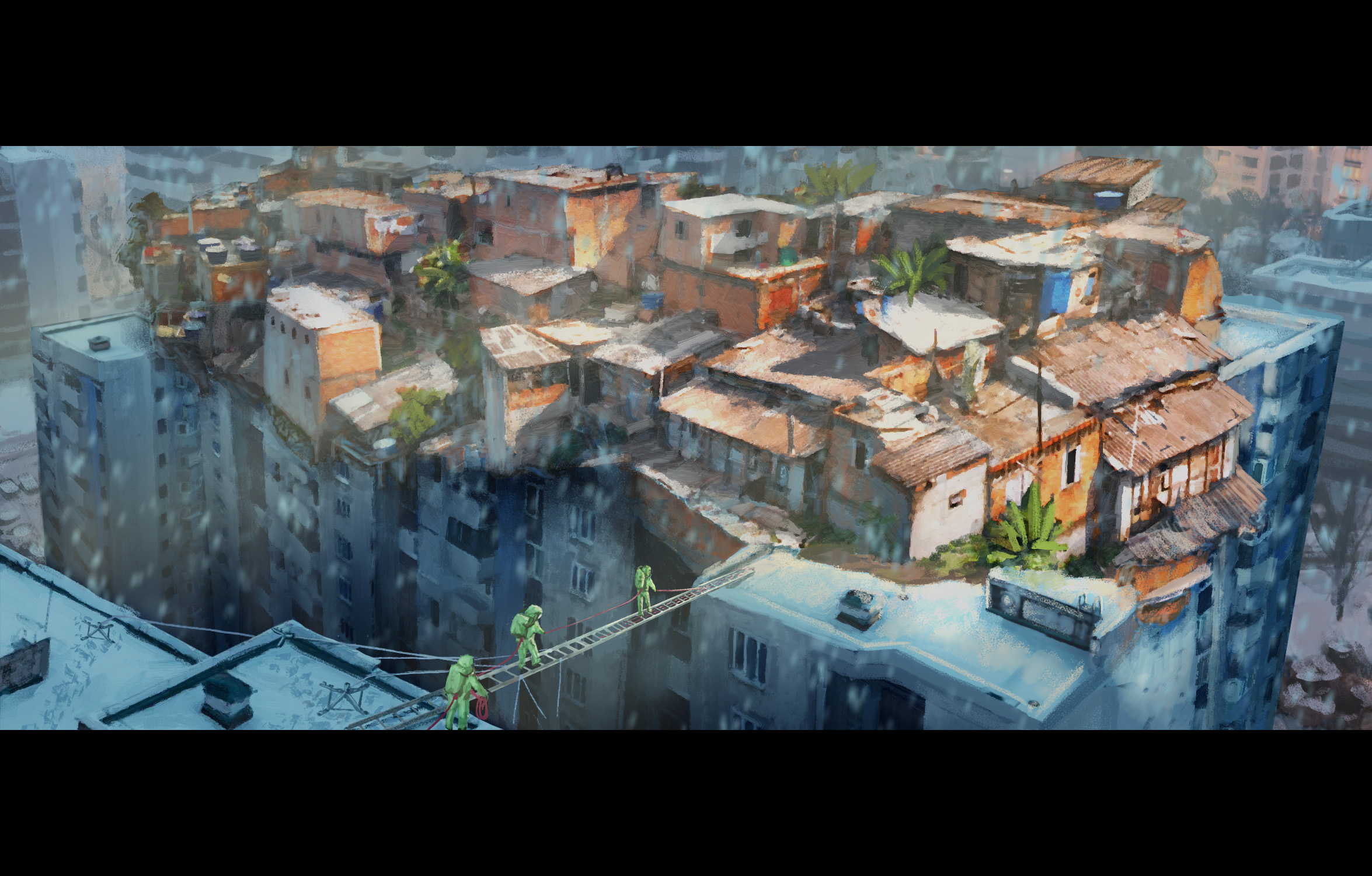 Once again a shift to the masters of the craft and to try to understand how they are doing it. This one is an awesome one from Jamie Jones again, on the first glance an almost monochromatic piece, but it reveals such a rich depth of tones and variations, that it is a pure joy to explore these. 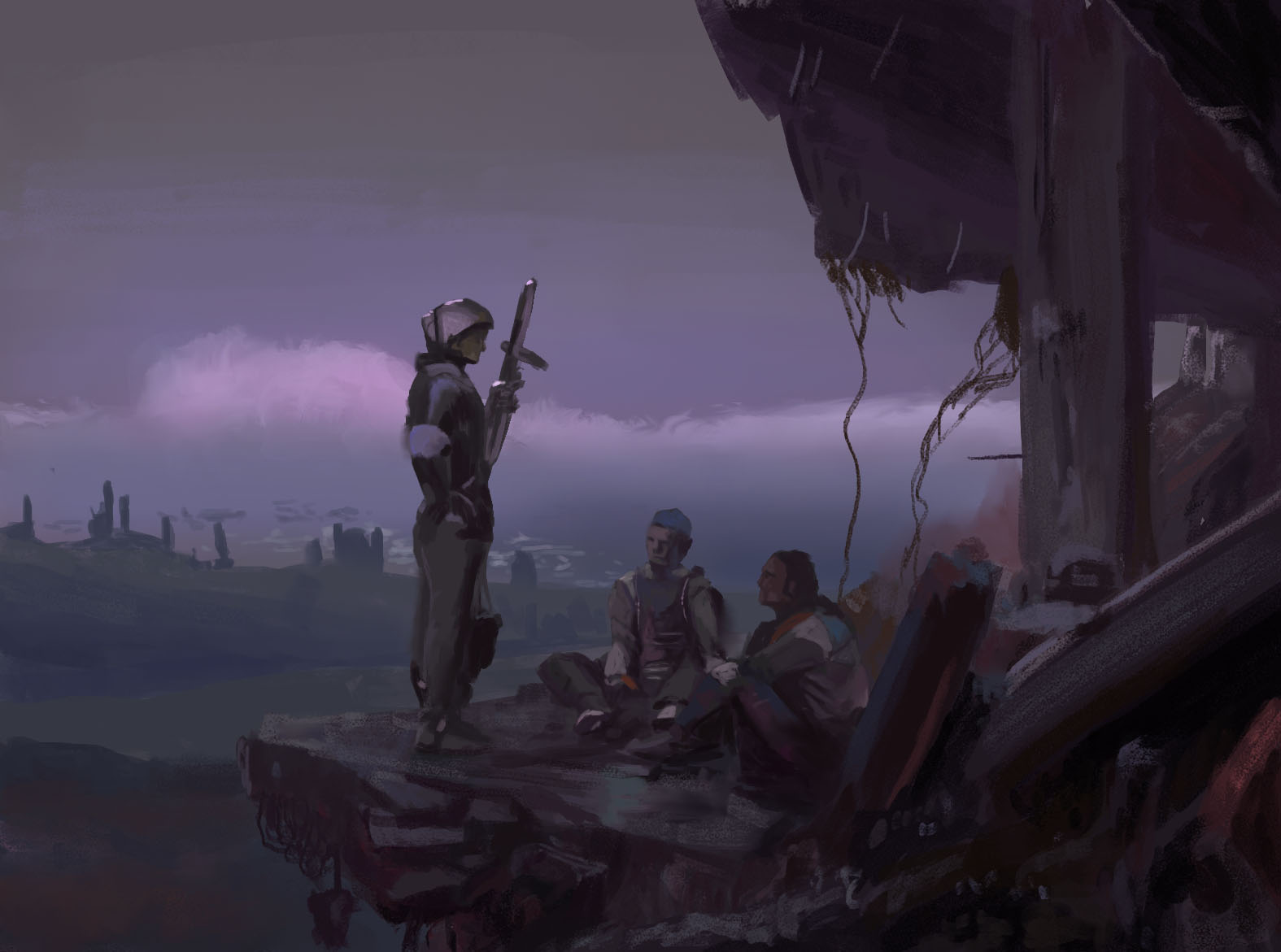 After I have already covered the mandatory canon fire exchange between ships on the high seas, I need to progress now to some interpersonal sharp-edged-weapons-violence :D.

With that in mind I did this piece about two dueling men during a boarding fight, one of them the captain of the attacked ship. Let’s see how that turns out in the end and hope that at least one f the two crews ends up with enough members to operate a sailing ship like this ;). 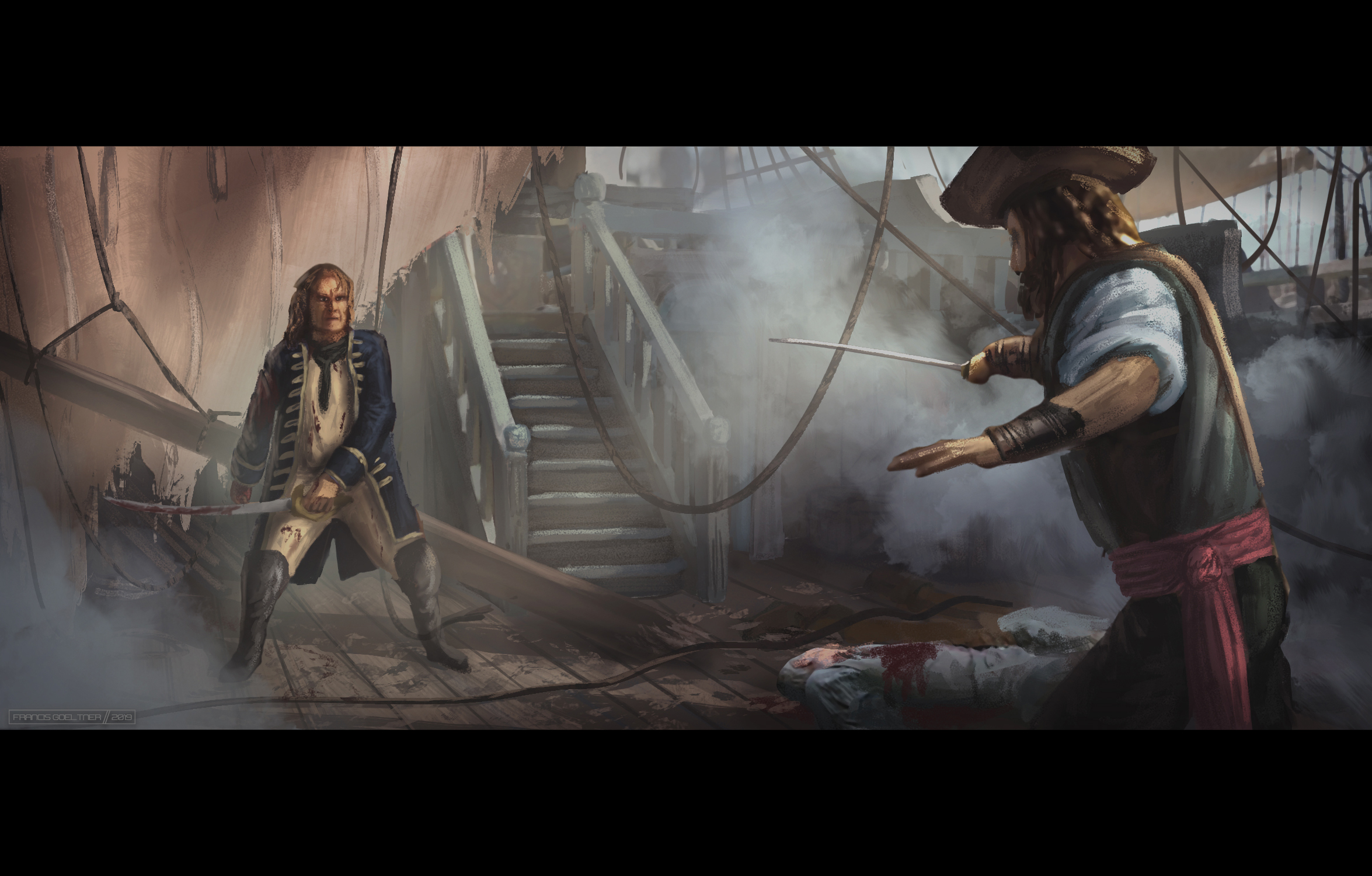 As long as I'm already at it,I figured another one can't hurt. This is somewhere in Europe again, one more gorgeous sun bathed scene with some tourist locations next to a river. 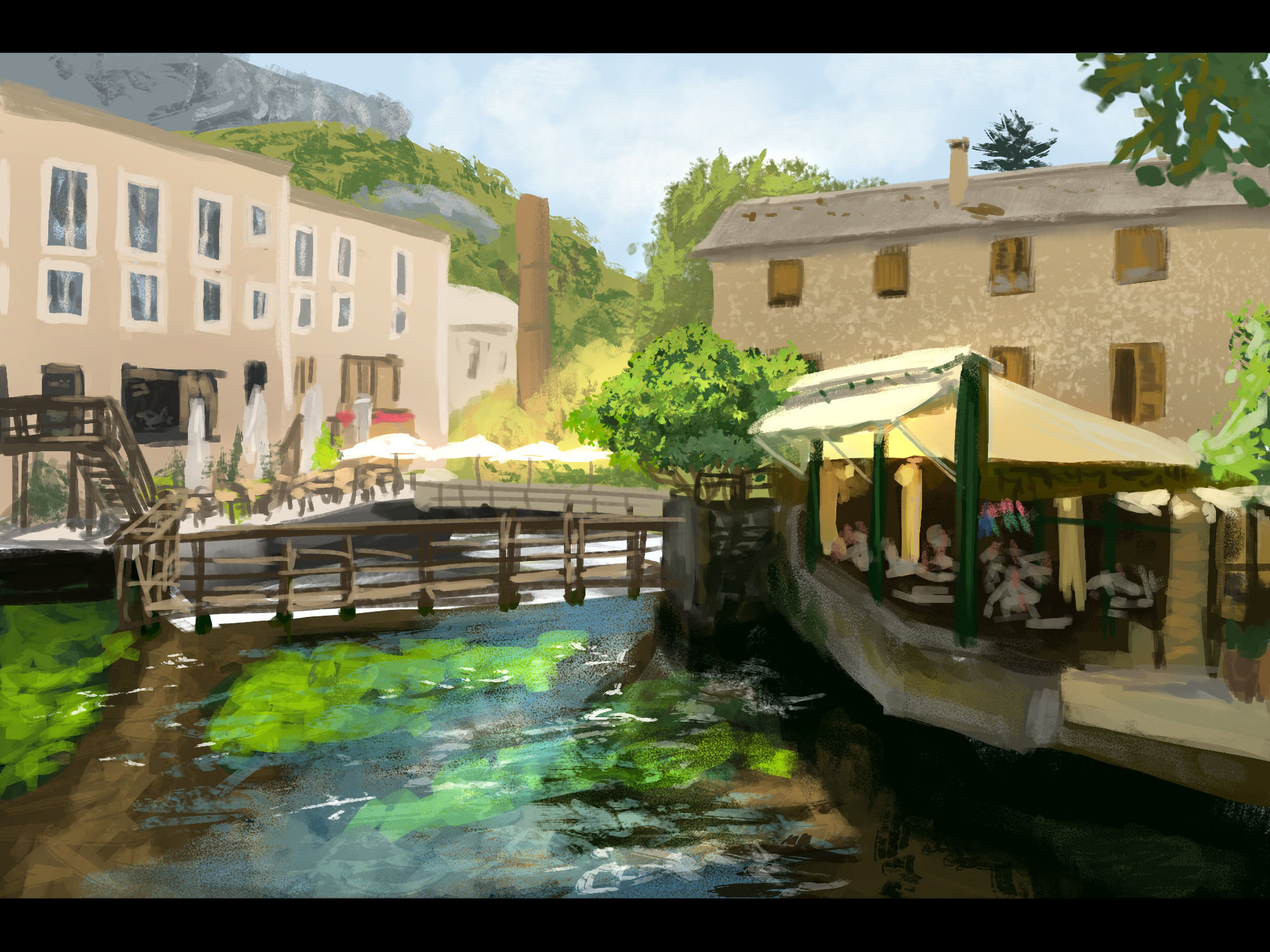 A little photo study of a beautiful street in Prague with gorgeous light after an afternoon rain. 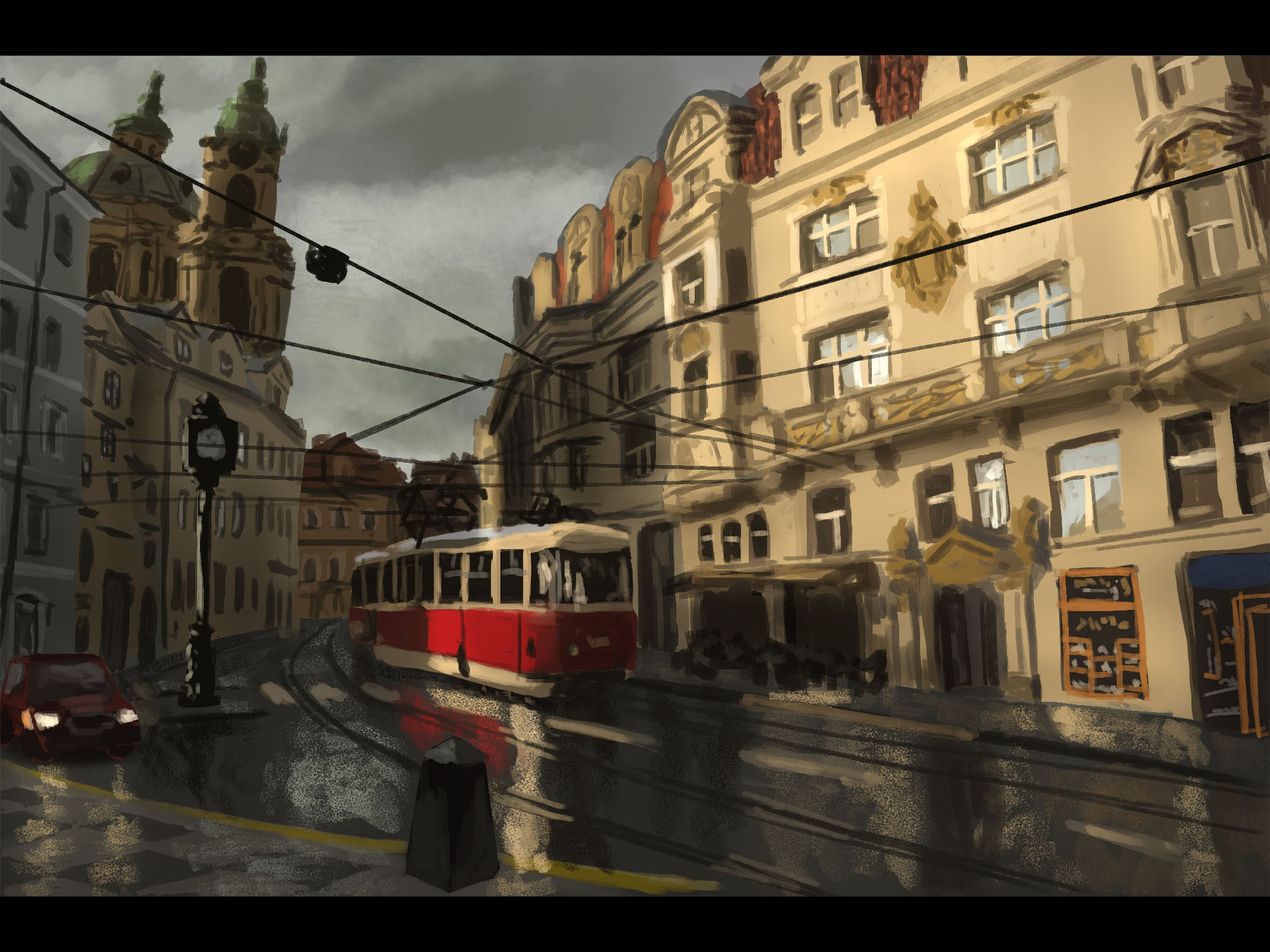 I went back to the design drawings I did a while back for two near future homicide detectives and their gear. I drew and shaded their back views, to have a more complete package.

In the not too distant future I plan to return to these though develop select pieces of this gear into proper concepts. 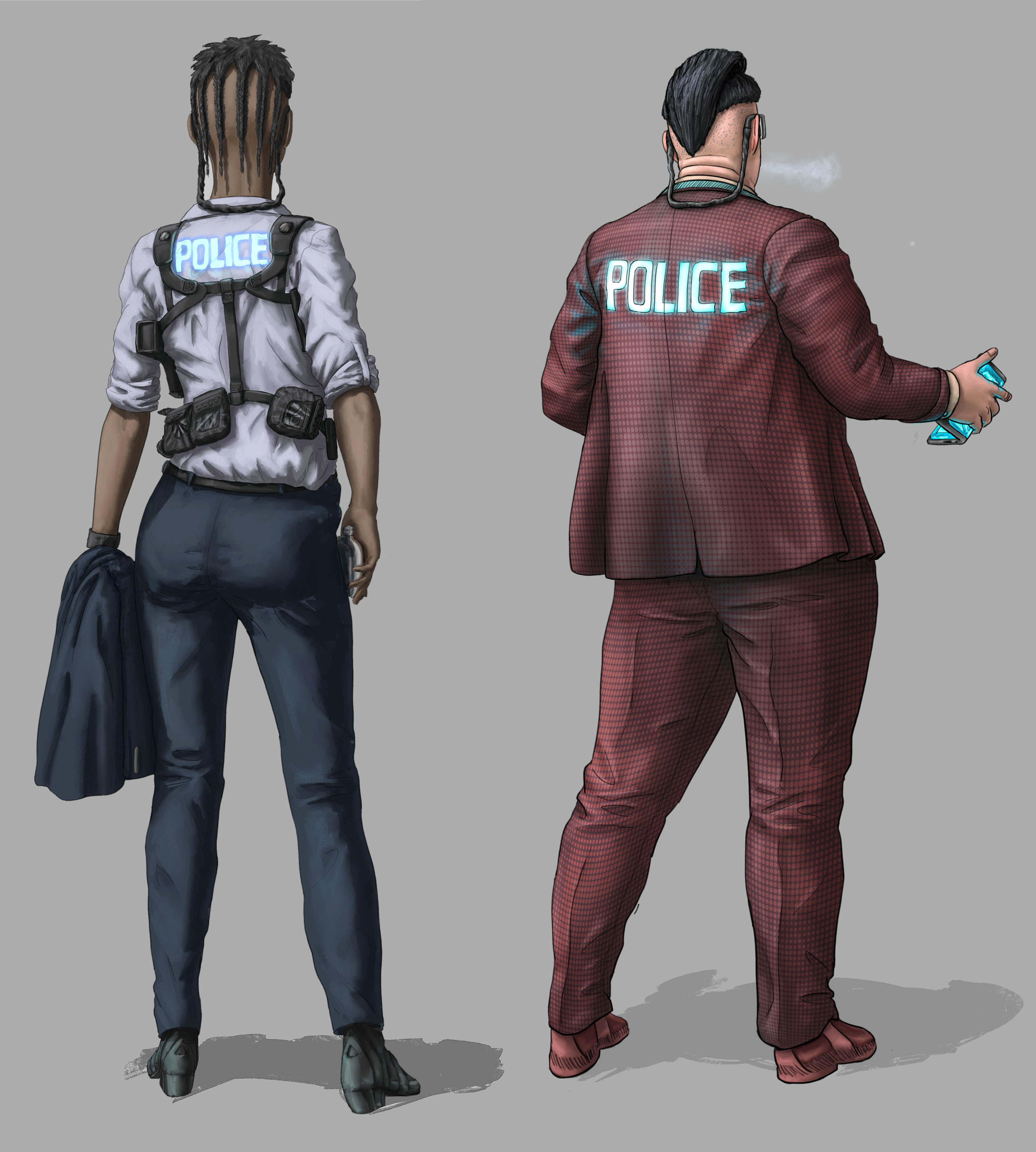 Switch again to the world of seagulls, peg legs and freebooters! Though no big canon roaring battles this time, just a moody little keyframe sketch of a merchant ship cruising between cliffs on the way to it’s home harbor. Why the sneaking between the cliffs you might ask? Well, haven’t you heard of… Pirates?!?  :D 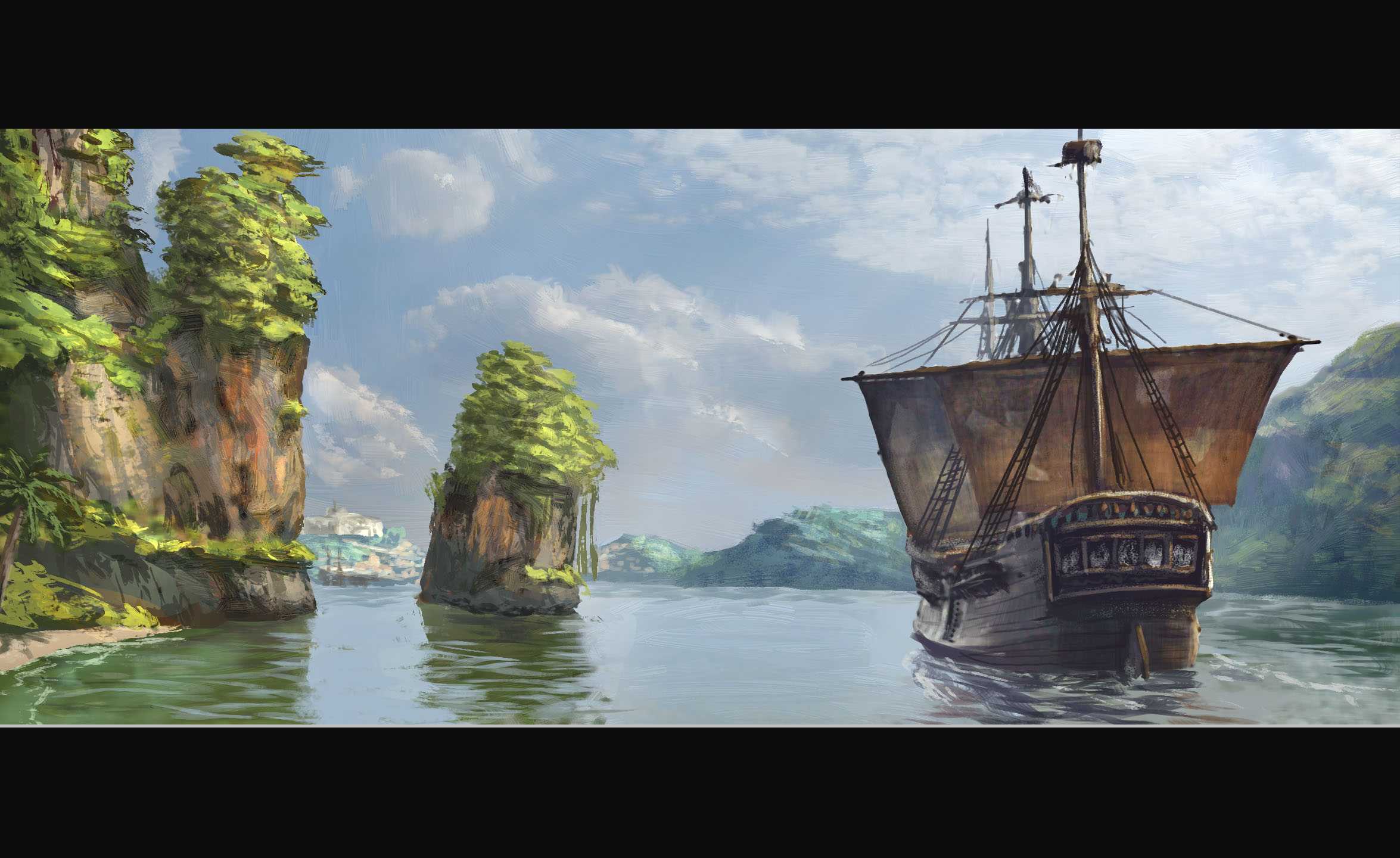 Another dimension crossover disrupts public traffic on a busy crossing in rainy Shanghai, when a part of a Moroccan fortification shows up, blocking the road. Effective as Chinese authorities usually are, the area is cleared of gawkers and bystanders and a team of scientists move in to look into the phenomenon. 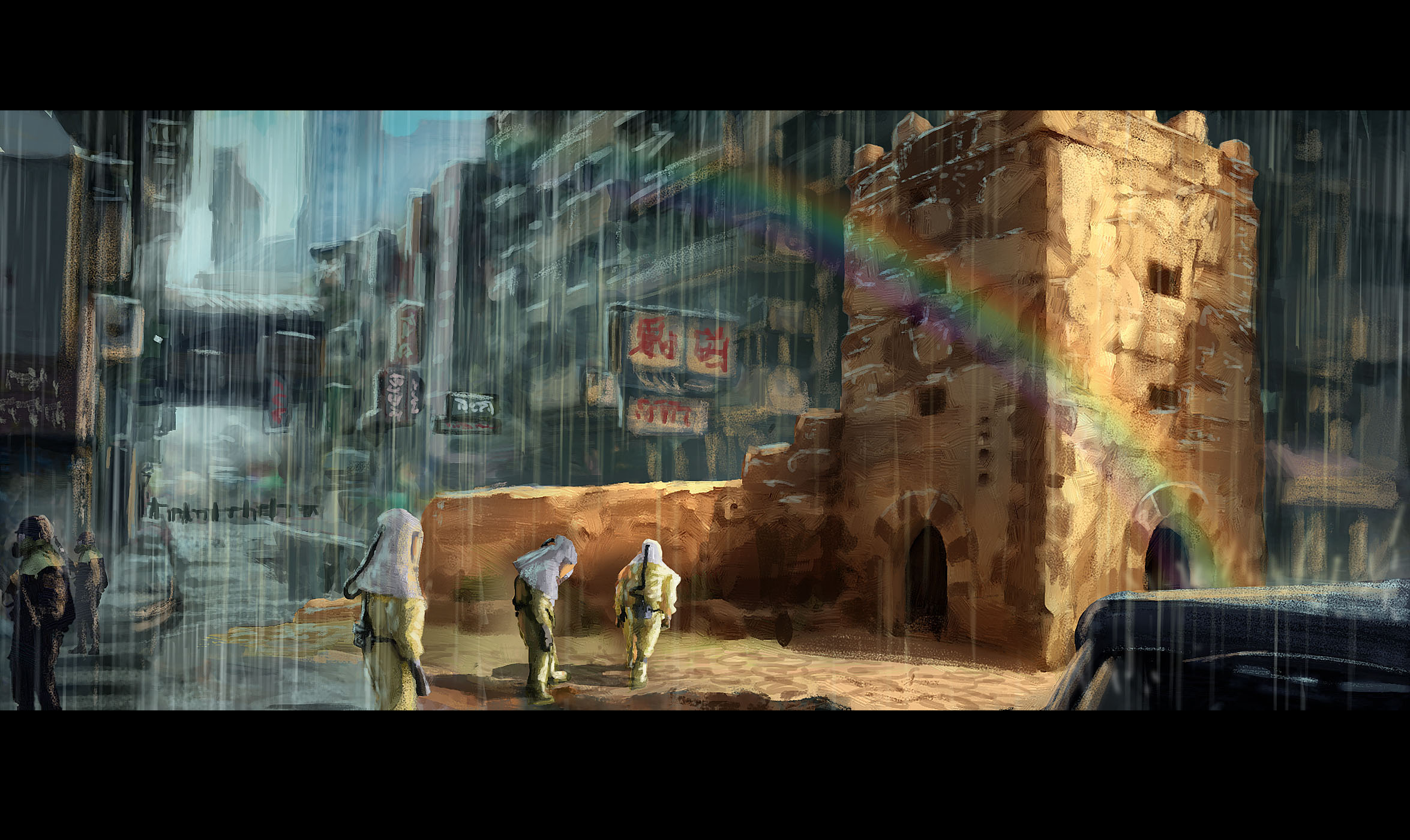 Besides your own little special projects, sometimes other gigs come along with some fun settings, that are not what you would have chosen yourself because the first reaction impulse is: “Naaah that has been done recently in big IPs!”.

That was pretty much how I got involved with pirate stuff recently so you can expect to see the odd ship or swashbuckler here and there from me. 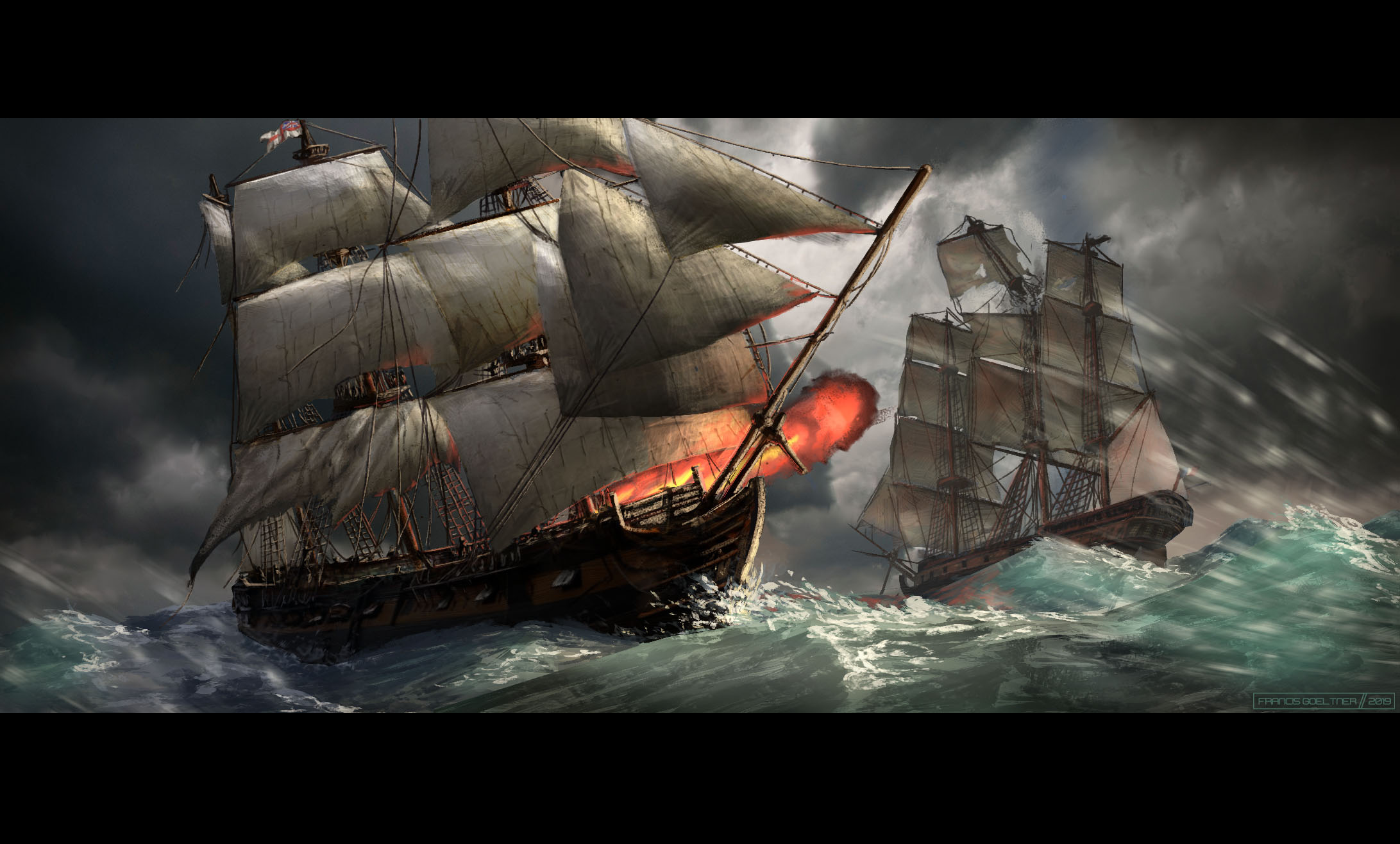